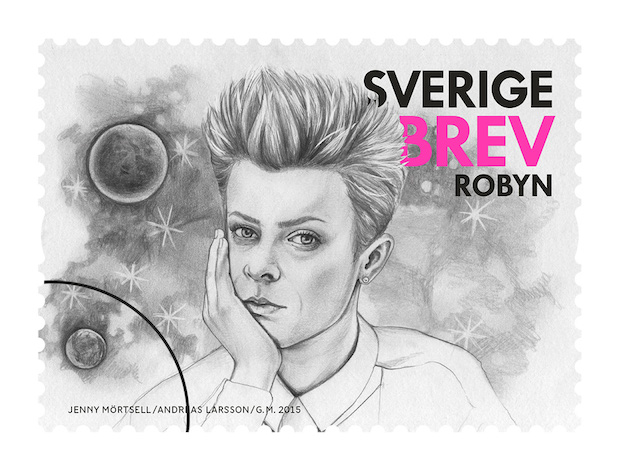 Music geeks and stamp collectors have just been given a great gift, and one that should find common ground between the two. Postnord, the postal company that’s run by the governments of Sweden and Denmark, has just announced the launch of a new series of stamps depicting Swedish musicians. There are five different artists depicted on the stamps: Robyn, First Aid Kid, producer Max Martin, Avicii, and Seinabo Sey. That’s the Robyn postage stamp above.

The stamps will be available beginning January 15. Postnord says in a press release that Sweden ranks third in the global export of pop, and each personality represents a recognizable face in Swedish music. First Aid Kit, for one, are pretty stoked about being selected for the honor. “Being on a stamp is really awesome, and also very surreal,” the group says in a statement to Postnord. “It’s not something people expect to happen! We’re planning to send a letter to our beloved grandfather in Hampetorp — he’ll be surprised for sure.” You can see the full series of Postnord musical artist stamps right here.

Read our Hall of Fame feature on Robyn’s Body Talk.