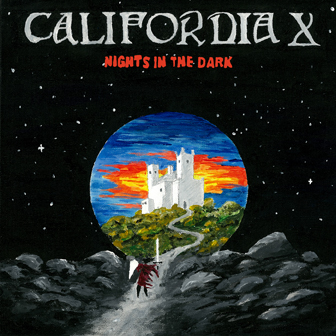 If you missed the self-titled debut album by Massachusetts guitar slingers California X last year, you missed out on one of the year’s most ass-kicking alternative rock records in the tradition of early Smashing Pumpkins, Dinosaur Jr. at their most melodic, or a more muscular Cloud Nothings. While you catch up on that record, however, get ready for more where that came from; California X has just announced that their sophomore album, Nights In the Dark, will be released via Don Giovanni on Jan. 13. And based on the first new music we’ve got from the record, it’s clear the band is still keeping up with the massive riffs and powerful fuzz of that first album. That’s the album cover above, though the group has yet to release the full tracklist. We do know that there are tracks titled “Nights in the Dark,” “Red Planet,” “Garlic Road,” “Blackrazor (Part 1)” and “Blackrazor (Part 2)”. So that’s a start!

Listen to the first track to be released from the album, also called “Nights in the Dark,” below.