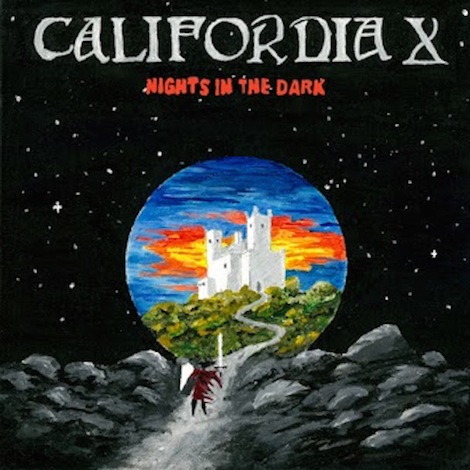 With so much experimentalism going on in music these days, it’s a relief to hear an album made entirely of no bullshit rock ‘n’ roll. Uncomplicated rock music — guitar, bass, and drums — can be really enjoyable when done well; California X knows what’s up. The Hadley, Mass. band is loud, lush, melodic, and never boring. California X doesn’t seem to have an agenda beyond driving catchy rhythms into the listeners’ skull with high-flying guitar leads and potent hooks. If 2015 ends up being the year of fuzzed-out conceptual balladry, then take note: Nights In The Dark is where it started.

Similar to their self-titled debut from two years ago, Nights In The Dark expands on guitar-drenched textures and harmonic hooks. California X shares an engineer (Justin Pizzoferrato) and has shared a stage with another Massachusetts band, Speedy Ortiz. And while the two bands share an affinity for wailing guitars, California X has more sludge in its mix. Guitarists Lemmy Gurtowsky and Zack Brower rip, and together with the weight of Cole Lanier’s drums, Gurtowsky’s vocals come dangerously close to being eaten up by the loudness of the band. Especially on “Summer Wall (pt. 1),” Gurtowsky’s vocals seem an ample distance from the microphone. But the guitar fervor covers up any possible blemishes on Nights In The Dark, and so does the snap of the snare, the mammoth bass drum, and toms that find a resting place behind my ears. There is one acoustic passage, “Ayla’s Song,” and another bass driven passage,“Garlic Road,” that is reminiscent of Kyuss’ desert vibe. Gurtowsky says, “cool,” right before “Ayla’s Song” ends, and it is a little cheesy.

However, those loud guitars are agents of earworms that squirrel into songs and noodle around. “Blackrazor (pt. 2)” is top billing for California X’s speed and start/stop ability, finished nicely with a hot guitar solo. Nights In The Dark is definitely for those who like the sound of guitars. It’s not necessarily spectacular, and it’s not supposed to be. What it is is rock solid, and warrants its share of future listens. When the feedback uncoils and fades out, you’ll be hungry for more guitars. For California X, rock ‘n’ roll is alive and well.

Stream the new California X album, Nights in the Dark