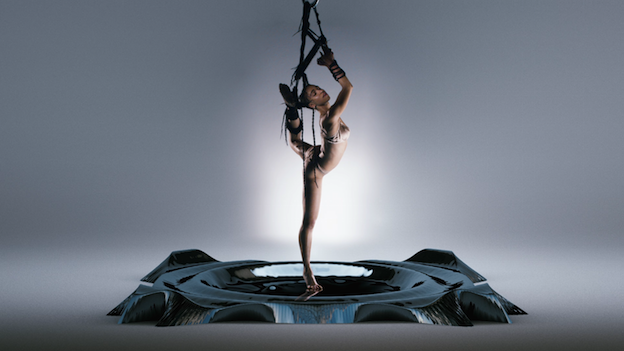 FKA Twigs has yet another visually stunning and avant garde video to share from her newest album, last year’s LP1. “Pendulum” is an intimate clip with some extreme close-ups of Twigs’ mouth, and a slow reveal of the artist in Japanese shibari bondage, suspended by ropes as she hovers over a weird and amorphous silvery platform (becoming her own sort of pendulum, it would appear). Her own hair becomes an architectural piece, which sort of resembles the ropes that bind her, of which Twigs notes in a press release, “using my own hair represents me at one time being suspended and held back by my own fears.”

The video is self-directed, and striking. And pretty weird — which is A-OK if you ask us. Watch the FKA Twigs “Pendulum” video below.