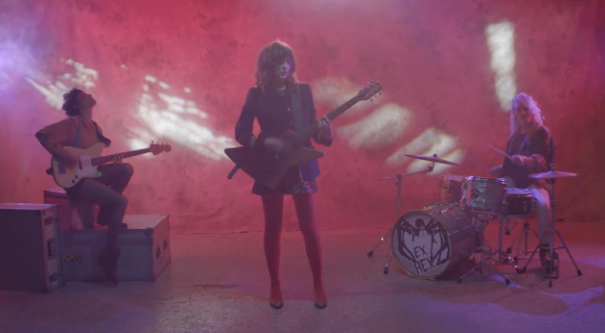 Ex Hex have another great video to share from their awesome debut album, Rips (about as accurate a title as you could muster up for a straightforward punk rock record like this one). The clip for “Don’t Wanna Lose Your Love” was directed by Lara Jean Gallagher, and debuted today via NME. It’s inspired by the 1982 film Ladies and Gentlemen: The Fabulous Stains, and finds the trio in their best ’80s garb, rocking out in a colorful set and on a street. There’s tights, leotards, leopard print, denim jackets, Gibson Explorers and more ‘tude than any of us know what to do with. So, basically, it’s awesome, and pretty silly. But awesome — don’t forget that part.

Watch the Ex Hex “Don’t Wanna Lose Your Love” video below, and be whisked back to the 1980s.

Merge Records is now on Bandcamp