Let’s face it: Experimental bass and drum duos aren’t for everybody. But on the cusp of Lightning Bolt’s sixth album – which might just make history books as their most accessible record, since it marks the group’s first project recorded in a proper studio – now’s as good a time as any to dive into the band’s catalog. Why not just listen to Fantasy Empire, you ask? Well, while I have high suspicions that it could very well be the band’s most approachable (more on that in a couple weeks), it’s still an album that further rewards a listener that has some familiar who the Brians are and what they do. So if you take this short journey with me, I promise it will be worth your time.

Now, with a genre as intellectually grounded as noise rock, it helps to have an understanding of a band’s influences and artistic motivations before cranking up the eardrum-shattering hits. So we’ll start with a little history lesson. The type of noise that Brian Chippendale and Brian Gibson construct has some pretty firm roots in the kind of noise rock that Japanese band Boredoms has been unleashing since the ‘80s. The peak years of Boredoms’ output found the group mixing elements of krautrock, psychedelic rock and punk rock into a meat grinder of noise and sound experiments. Boredoms’ styles vary heavily throughout their career, and sometimes even on a particular record. But certain moments, such as “Shock City” from Chocolate Synthesizer serve as obvious blue points for the blistering compositions that Lightning Bolt so often deal in. Pay close attention to the drumming patterns, as well as the way the track juxtaposes its quieter and heavier moments.

Now that we have our thumb on the band’s noise influences, it’s important to note the type of composers that inspire the song structures Lightning Bolt often deal in. Both rhythmically and compositionally, the Brians owe a lot of their songwriting influence to neoclassical/minimalist composers such as Philip Glass and Steve Reich. Notice the disorienting use of rhythm and pace in this piece by Reich, as well as the way he allows this simple idea to breathe and expand over time.

So what does all this have to do with Lightning Bolt? Perhaps the best way to explain that is with “The Faire Folk” off of Lightning Bolt’s sophomore record Ride the Skies. Give it a listen and notice how Lightning Bolt seamlessly join the styles highlighted by the previous two selections. In the beginning, Gibson’s playfully chaotic bass work is made further disorienting by Chippendale’s hi-hat frenzy, an aesthetic that eventually gives way to one of the band’s more gritty, room-filling compositions. At those points, the track is noisy and powerful, but still doesn’t sacrifice the intricacies of the piece’s front half.

Hopefully that arms you with an understanding of what makes Lightning Bolt such an interesting and engaging listen. Not your granddaddy’s rock’n’roll –that’s for certain- but a band that rewards both patience and stamina with a pleasantly chaotic after taste. But that’s just one song! Now that you’ve gotten your hair wet, let’s float in the direction of the deep end and plunge into some full lengths. 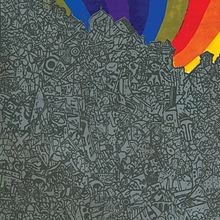 Oddly enough, one reason that Wonderful Rainbow is considered one of the Brians most accessible records is because it’s the record in their discography that spends the most time hitting hard and fast. This is probably because, for many new listeners of Lightning Bolt, the hardest hurdle to jump is not one of volume and aggression, but the more nuanced, high-art moments that the band is prone to steer down. But on Wonderful Rainbow, the band is cranking out their version of guttural, punk rock anthems. To be fair, these songs are still nuanced and complicated, just not as ethereal as the band’s other work. Still, the gritty bass and hammering drums on tracks like “Assassins” and “Dracula Mountain” are always a crowd pleaser, and have probably done the most work to draw in listeners for the band. It’s like I always say: Come for the brain-shattering rounds of noise-rage, stay for the pleasantly bizarre psych-noise. 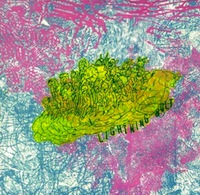 When I first heard Lightning Bolt’s sophomore LP— Ride the Skies— it struck me as both one of the more beautiful and unruly records I had heard. So, once you’ve tasted the band at their heaviest and most riff-driven, this is the next step on your listening journey, because it retains a lot of the volume but cranks up the bizarre-factor just a few hairs. Oddly enough, one of the more derailing factors of this record (at least compared to Wonderful Rainbow) is the range of peculiar tones we hear from the bass. It wails, creeps, screeches and groans in ways we were taught the instrument never should, and has a much stronger tendency to vamp a single note throughout this record, often focusing more on engaging rhythms than melodies (take “Saint Jacques” for example). Still, once you familiarize yourself with the aesthetic, Ride the Skies has much to offer in terms of variety. We’ve already covered “Saint Jacques” and  “The Faire Folk,” but this is also where you’ll find the intense drum-voice sound off of “13 Monsters,” the wacky blended tempos of “Wee One’s Parade” and “Forcefield,” and the comparatively ambient progression of “Into the Mist 2” You really could not ask for a more rewarding batch of Lightning Bolt tracks.

Also suggested: The band’s eponymous debut and the 2012 EP Oblivion Hunter both offer shorter doses of Lightning Bolt’s chaos, and tend to capture a similar energy to Ride the Skies. I’d also highly recommend viewing the tour/interview documentary The Power of Salad (2003), as it offers an interesting window into the band’s creative process and live performances. Because, while recordings are nice, the Brians are, at heart, a live band.

Advanced listening: 2005’s Hypermagic Mountain and 2009’s Earthly Delights are both lovely albums, but they somehow manage to take the intensity of Wonderful Rainbow and immerse it into a darker, less catchy territory. The result is dense and probably rather overwhelming to someone not previously familiar with the act.