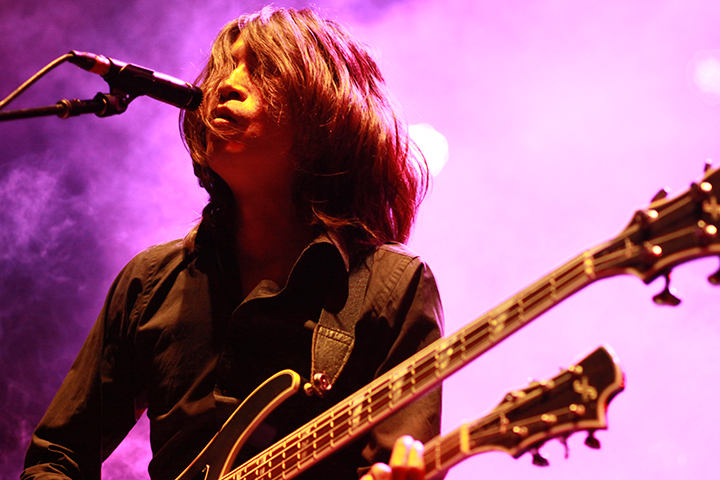 Just how confounding is Japanese metal trio Boris? In 2008, they released an album titled Smile, which in the United States featured cover art depicting an airplane that looks like it’s on fire, and featured a diverse mix of stoner and psychedelic rock songs. Only they actually released two albums called Smile, for while the U.S. version featured mixes by drummer Atsuo, the Japanese version featured entirely different mixes by Souichiro Nakamura that rendered some of the tracks almost unrecognizable from those released on the American version. Plus the album cover had a yellow heart on it. Oh, but there’s actually a third, live version of Smile, recorded after both of those, which looked like the Japanese version, but gray, and was, of course, live.

The band did a similar thing with the much more limited release of 2006’s Vein, which exists as both a noise album and a crust punk album, despite both having the same name. And their most famous album, Pink, is a considerably different album (by about 20 minutes) depending on whether or not you own the CD or vinyl version. Indeed, Boris’ catalog — which spans dozens and dozens of albums, EPs, singles and splits — is a complex code to decipher. It’s also well worth the effort.

Boris, named for a song on The Melvins’ Bullhead album, take significant influence from the band that gave them their name — in their sludge metal heaviness, their drone doom experimentation, their prolific nature and their ability to baffle audiences as much as enthrall them. They’re one of the most influential metal bands of the ‘00s, and easily one of the least predictable. For some that’s one of their greatest selling points. For others it’s a source of frustration. It doesn’t have to be though. Diving into Boris’ catalog opens up some pretty intense, powerful experiences; it just takes a little patience in figuring out how to navigate.

Boris have anywhere between 15 and 20 full-length albums, depending on whether you count different mixes and limited releases, and countless more EPs and other such minutiae. It seems at times like they’re a band that exists only for record collectors, but most of their best material is readily available without extra markup or obscene eBay price gouging. So, in an effort to guide first-timers through such complex terrain, here’s a five-step beginner’s guide to Boris.

If you know Boris, then you probably know Pink. If you want to know Boris, then you need to know Pink. It’s their best-known album, and their best album. After showing off their meaty, riff-heavy rock skills on 2002’s Heavy Rocks and 2003’s Akuma No Uta, Boris created (mostly) an entire album’s worth of noisy, Sabbath-inspired stoner metal. And it’s fucking incredible. Essentially, this is the album that has all of the band’s best hooks, as heard in the soaring chorus of “Pseudo-Bread,” the wild riffs of “Woman on the Screen,” and the fuzzed-out guitar squeals of “Six, Three Times.” They dive into some ultra-heavy sludge on the title track, and a more concise version of their trademark drone on “Blackout.” But nothing here is more breathtaking than “Farewell,” a dense, shoegaze dirge that’s easily the greatest song the band ever wrote. For starters, it’s beautiful, but more importantly, it explores a great range of sounds while retaining the heaviness that the band is known for. Plus, it’s an ideal for the dream pop and shoegaze sounds the group took on a few years later with Attention Please, albeit more affecting and sonically mesmerizing. There’s a lot happening on Pink, all of it amazing. Start here.

If any of Boris’ albums can go toe-to-toe with the roaring, furious power of Pink, it’s Akuma No Uta, a six-track set of meaty sludge metal and psychedelic jams. Though its album art references Nick Drake’s Bryter Layter, if Akuma No Uta is influenced by a landmark 1970s album, it’s The Stooges’ Fun House, most notably in the shorter, more intense tracks “Ibitsu” and “Furi.” They make a lot of noise, come at the listener with a reckless fury, and amount to some of the most fun Boris has ever concocted. But they’re just one part of a more diverse whole, which includes the breathtaking drone piece “Intro” (which is ten minutes long — pretty massive for an introduction), the lengthy (and gorgeous) psychedelic jam “Naki Kyoku,” largely improvised sludge blues rocker “Ano Onna No Onryou,” and the thunderous closing title track, which begins like Earth and ends like Sabbath (who were briefly called Earth — clever, that). If you’re looking for a sampling of many of Boris’ diverse strengths in one place, this is the place to hear it.

Within the vast, diverse and confusing Boris catalog, one will find that quite a few of the band’s full-length, EP and single releases are splits or collaboration efforts with other bands. They’ve shared 7-inch space with Doomriders and Torche, and worked with the likes of Sunn0))), Merzbow and The Cult’s Ian Astbury on a handful of special releases. The most immediately rewarding of these is Rainbow, a full-length album recorded with Michio Kurihara, guitarist in Japanese psychedelic rock band Ghost (not to be confused with the Swedish band). Released within a year of landmark album Pink, Rainbow finds Boris exploring more nuanced compositions, some of which are gentle and pretty (“My Rain”), others which explore Godspeed You! Black Emperor-like post-rock drones (“Shine”), and some that stun with their classic rock grooves (“You Laughed Like a Water Mark”). In fact, it’s almost like a quieter companion piece to Pink in how it explores as many different styles and textures, but without blowing out the amplifiers. Those who prefer Boris at their most booming or droning might find this release harder to warm up to, but ironically, it’s one of their most accessible albums, and listeners not quite ready to dive into their most epic or eardrum-piercing albums would likely find a lot to love on Rainbow.

Boris made the most of their early-Covid lockdown period by recording and then surprise releasing one of the most fun records to ever bear their name. NO, a set of thrash and hardcore songs that represents the most direct, aggressive and even catchy Boris has sounded in several years, draws heavily on the band’s ‘80s hardcore inspirations like Gudon and G.I.S.M., as well as some of the Melvins-y sludge that first left an imprint on the Tokyo band more than 25 years ago. There’s a renewed sense of reckless fun to these songs, many of them wrapping up in a relatively brief two or three minutes and just about all of them blazing with youthful energy. NO shows how a band with seemingly limitless directions can take the idea of going back to basics and make it seem unusually fresh.

Throughout their career, Boris have recorded a number of album-length suites, such as 2000’s Flood, an album that reveals its patient beauty gradually in four lengthy movements, much of it entirely instrumental. Structured similarly but arguably more accessible—and with an even more climactic second half—is 2003’s At Last -Feedbacker-, which finds the trio building from hazy sheets of guitar that feel almost like dispatches from the David Lynch universe into a louder, more crushing peak and eventually total noise annihilation. It’s best experienced without distractions, on a good set of speakers or headphones, without distractions. In a sense, it feels like the polar opposite of an album like NO—where that record sounds great under any circumstance and requires essentially no preparation, At Last -Feedbacker– is more of an art piece, one with an awesome power and a subtle gentleness contained in one continuous melody.

Also Recommended: Boris’ 2008 album Smile, which began this discussion, is one of their most accessible releases, if one of their least cohesive. That doesn’t mean it’s not really good though. It’s just a bit all over the place. Think of it like a Boris mixtape, and it makes a little more sense. Next seek out 2000’s drone epic Flood, 2002’s riff-rocking Heavy Rocks, and 1998’s Amplifier Worship, which are all now more readily available stateside due to a series of reissues from Third Man. And following that, pick up Noise, a diverse but anthemic set of tracks that incorporates shoegaze, sludge metal, drone and crust punk into one sprawling but endlessly entertaining set of songs.

Advanced Listening: OK, well, we’ve already covered a lot of ground but because of how expansive Boris’ catalog is, there’s still more out there for bolder listeners. The band’s collaborations with Merzbow and Sunn0))) — 2005’s Sun Baked Snow Cave and 2006’s Altar, respectively — are noisy, droning avant garde releases that are epic, if a bit tricky to take as a whole. On the other end of the spectrum, there’s 2011’s New Album, which is Boris’ J-Pop album, full of flashy synths and sensory overload. And released that same year, Attention Please, a darkly charming set of trip-hop and shoegaze that fans were divided on, but the ones who landed on it being a great album are the correct ones. Then hear the band’s early 2022 album W, a companion album of sorts to NO, only exploring its flipside: spacier noise-pop pieces with less full-throated aggression and vocals exclusively from guitarist Wata.