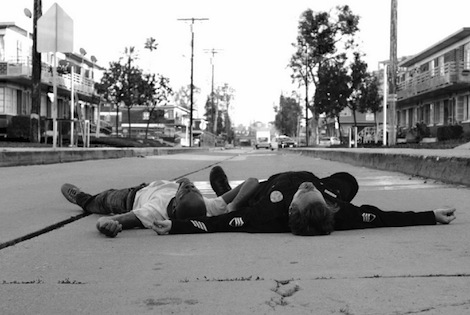 El-P and Killer Mike, aka Run the Jewels, have just released a new video for “Close Your Eyes (And Count to Fuck)”, from their outstanding second album, Run the Jewels 2, featuring Zack de la Rocha. The video was directed by A.G. Rojas, and depicts a physical struggle between two men: A white cop (Shea Whigham) and a black civilian (Keith Stanfield). Rojas writes of the concept behind the video:

When Run the Jewels sent me this, I knew we had the opportunity to create a film that means something. I felt a sense of responsibility to do just that. We had to exploit the lyrics and aggression and emotion of the track, and translate that into a film that would ignite a valuable and productive conversation about racially motivated violence in this country. It’s provocative, and we all knew this, so we were tasked with making something that expressed the intensity of senseless violence without eclipsing our humanity. For me, it was important to write a story that didn’t paint a simplistic portrait of the characters of the Cop and Kid. They’re not stereotypes. They’re people—complex, real people and, as such, the power had to shift between them at certain points throughout the story. The film begins and it feels like they have been fighting for days, they’re exhausted, not a single punch is thrown, their violence is communicated through clumsy, raw emotion. They’ve already fought their way past their judgments and learned hatred toward one another. Our goal was to highlight the futility of the violence, not celebrate it.

I am really proud of where we ended up, and I am very thankful that our actors Shea Whigham and Keith Stanfield committed to these characters 100%. They breathed complex life into two people who are usually portrayed in simplistic ways—as archetypes. I can tell you it was an emotional shoot day. It is tough to re-create moments that are so fresh and prevalent in our world today. It affected all of us in deep ways. But I believe that it is important that the way we feel when we see these events in real life has an effect on us. That we resonate with what we know to be right and we don’t numb ourselves out so those feelings can simply be swept away, we must confront them and take some action, however small, or we’ll be stuck in the same cycle of violence and hate.