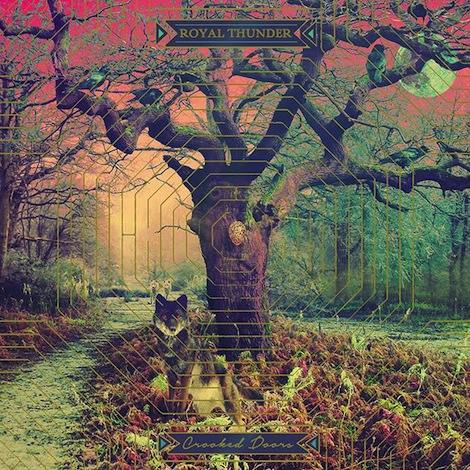 Royal Thunder‘s 2012 debut album CVI did everything that a great metal debut album should. It rode in on a rush of energy and mystical darkness, introduced listeners to a superhuman vocalist in Mlny Parsonz, and above all, rocked really fucking hard. And as a result of the reception in the metal press, not to mention shows with fellow Georgian hard rock/metal outfit Baroness, found themselves pegged as being a part of a larger southern sludge metal trend, sometimes mentioned in the same breath as Kylesa or Black Tusk. That’s perfectly valid; on some of CVI‘s heaviest tracks, and even more so in a live setting, Royal Thunder more than hold their own against some of their Atlanta/Savannah psych-metal contemporaries. But what made Royal Thunder’s debut special wasn’t so much the heaviness, but how unapologetically melodic it is. When they lay down riffs, Royal Thunder earns the “Thunder” in their name, but at heart, they’re one of the best bands around in a genre that’s been in dire need of cachet for some time now: Hard rock.

With an even stronger set of hooks, and a more powerful vocal performance from Parsonz, Royal Thunder’s second album Crooked Doors finds the band wearing their stadium rock swagger with pride. On a broader scale, the differences between CVI and Crooked Doors aren’t so dramatic; the melodies are still front and center, righteous guitar riffs still dominate their musical landscape, and in their best moments, they settle into a groove carved out decades before by the likes of Led Zeppelin and Heart. But on Crooked Doors, the band sounds more focused. There are fewer diversions into meandering prog-rock excess, and for that matter, few jarring transitions between those tracks and their more immediate, three-minute rockers. There’s a much stronger flow and cohesion this time around, making it more impressive as an album than simply a collection of good songs.

The songs though — they’re definitely good. Opening track ushers in a greater sense of urgency and tension than “Parsonz Curse” did on CVI, and only grows into a breathtaking show-stopper of a track from there. The juxtaposition of Parsons’ sneer, “It squeals/ It’s in the air tonight/ That devil knows my name,” is utterly chilling set against Josh Weaver’s guitar licks. And though it’s always a bit dangerous to put a track with this many layers up front on an album, detouring through the many hallways and corridors on Crooked Doors only reveals more standouts. The thumping bass and burly guitar chug of “Forget You” flirts with the southern sludge of many of Royal Thunder’s Georgia contemporaries, while “Floor” is a jangly heavy-psych number that’s just this side of danceable. The catchiest number of the bunch may well be “The Line,” however, which stomps and soars, and takes some satisfying diversions through acid-rock rabbit holes.

There are more than a few stylistic surprises to be found on Crooked Doors, the most satisfying of the bunch being the dreamy, hypnotic power ballad “One Day.” It’s about as far from metal as Royal Thunder’s ever come before, but there’s still that kernel — that unmistakable power, however restrained — that still makes it feel of a piece with the other 10 songs on the album. And that’s key to understanding Royal Thunder’s strength and vision. In a recent interview with Steel for Brains, Parsonz commented on metal’s pursuit of the extreme, noting “People talk about metal like you have to have someone screaming, and it has to be coming with all this distortion, and you’ve gotta be playing as hard and heavy as you can, but I don’t think that’s a new thing.” A good metal band will prove their worth with the heaviest and most brutal sounds they have, but a great one understands that sometimes you don’t always have to play so hard to leave a bigger impact.