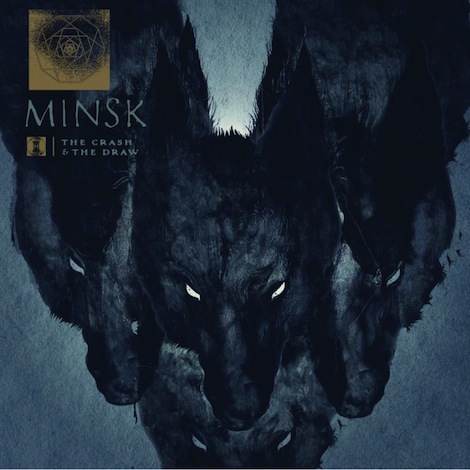 The kind of music that Minsk crafts requires a significant amount of patience. It demands patience on the listener, for one — their slow-moving, atmospheric sludge metal epics have a tendency to stretch well past the 10-minute mark, and never rush toward a climax. The songs wind and lurch, and sometimes meditate in place before ascending to the summit; there are no sprints in their itinerary, only marathons. Yet the unexpected consequence of taking the long way is that you get to actually enjoy the scenery. Where a band like Converge or Pig Destroyer can blur by like a Tasmanian Devil, throwing any number of riffs and breakdowns at a listener over the course of no more than two minutes, Minsk allows every moment to resonate and be savored. They derive strength from that patient pacing.

Yet an album like Minsk’s fifth, The Crash and the Draw, also doesn’t materialize overnight. It’s the longest of Minsk’s albums by a good seven or eight minutes, and likewise the one that arrives after the longest between-album break: Six years. Some of that time among the members of the Chicago sextet was spent outside the band, and some of them were spent with other bands (like Sanford Parker’s peculiar industrial supergroup Corrections House), but the respite appears to have served them well. The Crash and the Draw isn’t just a mighty return for the midwestern atmospheric sludge metal outfit — it’s one of their best albums yet.

Comprising elements of psychedelic rock, sludge metal, hardcore punk, black metal and various other pieces of their cosmic puzzle — much like their 2007 masterpiece The Ritual Fires of Abandonment — The Crash and the Draw is a lot to take in, even by Minsk’s standards. An album sandwiched between two ten-minute behemoths, with a four-part cycle in the middle titled “Onward Procession,” is not one that’s broken up into easily digestible parts. Minsk has rarely made for metal jogging mixtape fodder, and that isn’t about to change now. No, the best way to hear The Crash and the Draw is to make an event out of it, and soak in one glorious moment of heavy triumph at a time. It just so happens that those glorious moments are in abundance on this album, starting with the nearly 13 minutes of opening titan “To the Initiate.” It takes more than three minutes before the band allows any vocals through the atmospheric crawl of an intro, but a crash of burly guitar churn segues into an exotic psychedelic verse — and in less than half the length of the monolithic track, Minsk showcases more depth than you can find in most bands’ careers.

The Crash and the Draw is all about the slow payoff. That four-part “Onward Procession” suite? It occupies a full 21 minutes on the album, going through separate movements of atmospheric doom, sludge, cinematic post-rock and eventually a closing roar of psychedelic blood and thunder. And it’s not until that final four minutes that the suite reaches its peak, but the 17 minutes that guide the way aren’t wasted — they only heighten the build-up, and provide an even stronger set up for that immaculate climax. And there’s a similar, but comparatively faster payoff in “The Way Is Through,” which finds the group crafting beautiful, ethereal dirge passages before surging to an apocalyptic rumble. None of which is to say the album ever feels formulaic or expected, but Minsk have an exceptional skill at taking the listener somewhere in a song that ends much farther away than where it started. They move at their own pace, but you’ll just have to trust them. They’ll get you there, and it’s glorious — all it takes is a little patience.