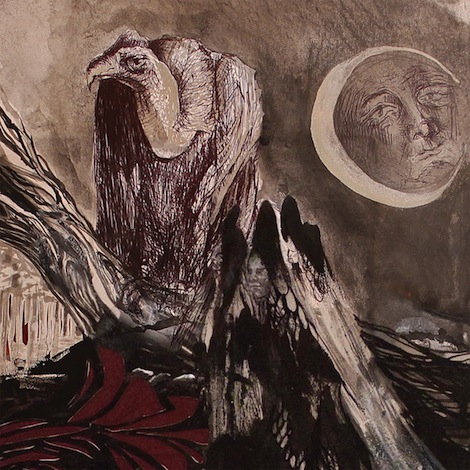 Metal abhors the false, but the band that literally names itself False is one that either has a hell of a sense of humor, or understands that goat’s blood in a golden goblet just doesn’t have the same shock value it once did. Having debuted with an auspicious, epic two-track album in 2011, Minneapolis black metal outfit False certainly don’t appear to be in the game for the yuks, but they’ve got a way of turning heads without the crutch of a calculated image. They’re plainclothes heathens, who until recently didn’t even reveal so much as their names (even now, all I can tell you is that their vocalist’s name is Rachel). And if it’s an increasingly risky move to let the music alone do the talking—even in a genre where anonymity is standard operating procedure—then it’s to False’s credit and benefit that the five lengthy tracks on new album Untitled are ones that leave a hell of an impact.

Untitled, which follows 2011’s Untitled (this gets confusing pretty quickly), is as much endurance test as it is an enduring high. By nature, black metal tracks that cross the 10-minute mark have a tendency to be exhausting, even at their best. So for False to include four that cross that mark—and one just behind it—is to impose some lofty demands on the listener. Yet while False has the audacity to ask the listener to sit through 59 minutes of abrasion, dissonance and menace—without so much as an interlude—even more audacious is their aim to make every second of those 59 minutes as intensely thrilling as possible.

They pretty much nail it, and they don’t take very long to send the message that Untitled will melt faces without warning or hesitation. Yet each of the five lengthy tracks on the album do so in vastly different ways. Within about a minute of opening track “Saturnalia,” the group leaps from an accessibly chaotic introduction to a spooky, synth-driven cascade of riffs that call back to vintage Enslaved or Emperor. The band packs in a similarly claustrophobic density to “The Deluge,” but in its final couple of minutes, it opens up to allow in a mesmerizing chorus of voices. And nowhere is the band’s penchant for the grandiose as breathtaking as on “Entropy,” a 15-minute blackened prog excursion with a triumphant introduction, and haunted-house organ as far as the eye can see.

So much of Untitled reaches for the ornate and the theatrical, musically, that False might catch you off guard with the powerful, surprisingly accessible album closer, “Hedgecraft.” This is the band’s album—their banger, their stadium-filler. If only, right? Still, for a 13-minute slab of blistering black metal intensity, it’s not just heavy, but melodic and overflowing with hooks. Whatever image False has crafted for themselves—or neglected to do so—their brand of black metal fills in the gaps by virtue of dazzling musicality alone.

Shadow of the Horns: Five Labels Keeping Metal Interesting in 2019