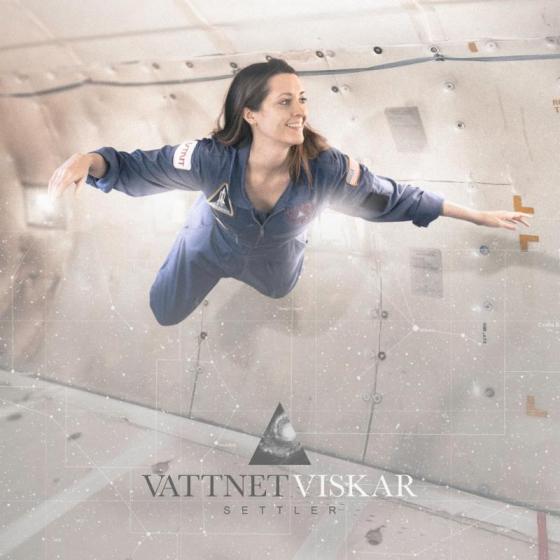 Vattnet Viskar‘s Settler doesn’t look like a metal album. The cover image depicts an astronaut floating in an anti-gravity chamber, surrounded by a bright glow and overlaid with a diagram resembling a map of constellations. It’s dreamlike—almost blissful. There’s no occult imagery, no ominous figures, and an almost total absence of the color black. A wild guess from someone with no knowledge of the New Hampshire metal band, or what they do, might put the photograph on the cover of a prog or ambient album, or perhaps one of a post-rock band—which is fairly close to the music that Vattnet Viskar makes, actually. But the story behind the photograph lends it a greater emotional weight: The picture, created by Josh Graham (who has also worked with Neurosis), is based on one of New Hampshire teacher Christa McAuliffe, who was chosen by NASA to travel on the Challenger space shuttle. She died when the shuttle exploded, 73 seconds after it launched, and it’s a memory that became deeply ingrained in the memory of the nation, and ended up leaving a heavy impact on the band’s members when they were just kids.

“It’s one of the most conflicted things I’ve ever seen: to be so happy, at the peak of life, only to have it all gone right after,” guitarist Chris Alfieri said in a statement before the release of the album. “Being on a path that you cannot stray from, even though you know that the end of the path is your destruction and the destruction of everything you know, you must do it, and you would choose no other way to live.” That’s some heavy food for thought, and that heartbreaking depiction of joy before tragedy is key to understanding the deeply personal nature of Settler. The astronaut is ultimately a metaphor—a face given to the complicated and heartbreaking nature of simply being alive, as evident in the events that led up to the writing of the album, which include divorce and the deaths of loved ones. And this is where Vattnet Viskar once again remind us that they are, indeed, a metal band, through an intense 40 minutes of catharsis, exorcism and soul searching.


Settler is where Vattnet Viskar not only buck black metal convention, but truly pour their guts out into an intense and draining set of post-metal songs. And it’s fucking beautiful. Its opening track, “Dawnlands,” is the launch sequence—the ascent toward the sun—driven alternately by one of the few moments of semi-conventional black metal as well as a soaring, gorgeous climax of breathtaking melody. From there, the band is in exploration mode, extending the limits of their sound while pulling from deep within to deliver something that builds on the strengths of 2013’s Sky Swallower with inspirational, albeit gut-wrenching emotion. The slow-moving, shoegaze-like “Yearn” nods to the apocalyptic atmosphere of Neurosis, with its darkly booming drum pattern that explodes into Nicholas Thornbury’s scream of “Race toward the sun!” And in its towering melodies and complex, textured progression, “Glory” leans more toward the triumphant post-hardcore of Envy, Thornbury’s harsh vocal treatments being the only element that ties the song back to metal.

In Vattnet Viskar’s own path toward emotional healing and introspection, they ended up pushing their sound into a more interesting and affecting realm. It’s not strictly black metal, and it’s not necessarily representative of any other one particular sound. They’re molding metal into their own image, and infusing it with their own blood and life force. It’s intense, and it’s wrenching, and it’s complex, and it’s beautiful. Settler will take a lot out of you, but you’ll walk away from it taking something even greater with you.