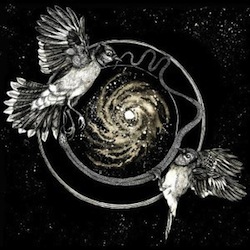 There’s nothing particularly traditional about the style of black metal that New Hampshire’s Vattnet Viskar play, though it’s easy to get that impression with just a cursory examination of the band. Take their name, a Swedish phrase which translates to “the water whispers,” reflecting the themes of nature and the environment that crop up in their music. Of course, without that bit of linguistic knowledge, it probably just sounds like a tuff Scandinavian phrase, and said with a menacing growl, it pretty much is. Likewise, “New Alchemy,” the track that opens their full-length debut Sky Swallower, rushes with the intensity of classic black metal, exploding with blast beats and tremolo-picked riffs. And yet, in its second half it scales back into more muted, spacious post-rock sounds, the likes of which are at least as impressive, if not more so than the more visceral, chaotic aspects of their sound.

Dig a little deeper into the background of the band and you’ll find that a few of its members are vegan, they all take some major influence from jazz, and have even written songs about the dangers of blindly following a narrow ideology. “Norsk Arysk Black Metal” this ain’t. Vattnet Viskar’s, however, is emblematic of a very American style of black metal, one born of the foundation of a European sound, but with little regard for maintaining a tradition with which it has only a loose connection. And on Sky Swallower, the group displays a keen acumen for exploring the more nuanced and powerful aspects of a genre already several decades old.

Containing five lengthier songs and three shorter, transitional tracks, Sky Swallower flows similarly to recent albums by Agalloch and Deafheaven, though on a much more concise scale. And where some bands make a more concerted effort to separate the interludes from the more fully fleshed-out tracks, Vattnet Viskar feature just as much atmosphere on the longer ones, and inject sufficient power into the shorter passages. The awe-inspiring “Breath of the Almighty” feels almost like three songs, beginning as a roaring metal track, easing into a Godspeed You! Black Emperor-style post-rock passage, then closing out with one more final explosion of intensity. Similarly impressive in scope is “Mythos,” which takes on more of a post-hardcore/sludge sound two minutes in, adopting a major key and commencing liftoff. It’s not a sharp 90-degree turn, but the change of landscape is a glorious one all the same.

The traditional aspects of black metal are certainly there on Sky Swallower, and every time the band launches full-force into darkened menace, it’s a powerful thing to behold. But Vattnet Viskar is — for the better — a much more adventurous band than that. In an interview last year, guitarist Chris Alfieri said, “We’re too metal for the hip kids, and I guess too hip for the metal kids.” It’s a familiar conundrum. But great artistic leaps only happen through those unafraid to color outside the lines. There’s no scene in which Vattnet Viskar comfortably rests, and if there’s an ideal they can be pegged with, it’s that of pushing metal forward.