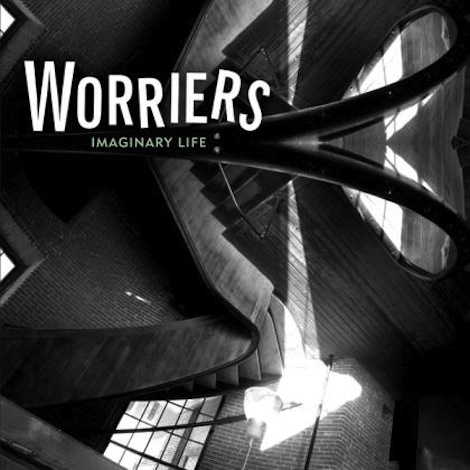 We’ll start with a difficult truth: Punk has never really been about the music. Sure, there’s a certain DIY aesthetic and attitude that is palpable in most punk approaches. But sometimes one person with an acoustic guitar is more punk than an entire, aggressively distorted quintet. So punk music is, more often than not, better represented by that attitude; more about the why than the what.

This fundamental core of punk rock is what makes Worriers‘ Imaginary Life such a profound and hard-hitting debut. Its 12 songs (spanning less than 30 minutes) don’t necessarily venture into new territory from a musical standpoint. Worriers are a four-piece band playing straightforward, melodic punk rock, as written by their singing/guitar-playing frontperson. There are driving, mosh-ready anthems like “Yes All Cops” and more pogo-ready moments like the bouncy closer “Chaser.” Every instrument practices healthy restraint and every vocal line is meant to be sung along to. It’s a formula that’s worked for decades, and Worriers aren’t trying fix what ain’t broke.

Where Worriers differ, then, is their execution of that attitude, most specifically via the lyrical prowess and storytelling of that frontperson, Lauren Denitzio. The songwriting, too, is true to punk form—concise, blunt and anthemic. But Denitzio complicates this formula by addressing issues, both personal and political, that most mainstream punk acts either cannot articulate fully or refuse to address. Sometimes these are wide-reaching—contemplating social power dynamics on “Yes All Cops” or confronting society’s strong penchant for a gender binary on “They/Them/Theirs.” But they also blur the normative punk rock formula by getting powerfully personal, such as on “Good Luck,” a track where Denitzio airs their resentment toward a former comrade (friend? lover? it’s not clear) who left behind city life for a domestic existence in a rural area.

Whether they are venting personal or social grief, Denitzio has a talent for making each word seem immediate, a trait that Imaginary Life shares with an album like Against Me!’s Transgender Dysphoria Blues. So it’s fitting (and probably not a coincidence) that Laura Jane Grace helmed the production on this effort, aiding her hand to make sure these songs resonate powerfully while still sounding as crisp and melodic as possible.

Imaginary Life is a powerful set of songs; simple enough to have you singing along by the second hook but offering enough complexity to merit hours of lyrical excavation. But it’s also a refreshing guide on how to refresh and recycle a music vehicle that could still use a bit of queering, at least in the mainstream world of punk. The best thing we can do is tell our stories. It doesn’t hurt if they sound this great.