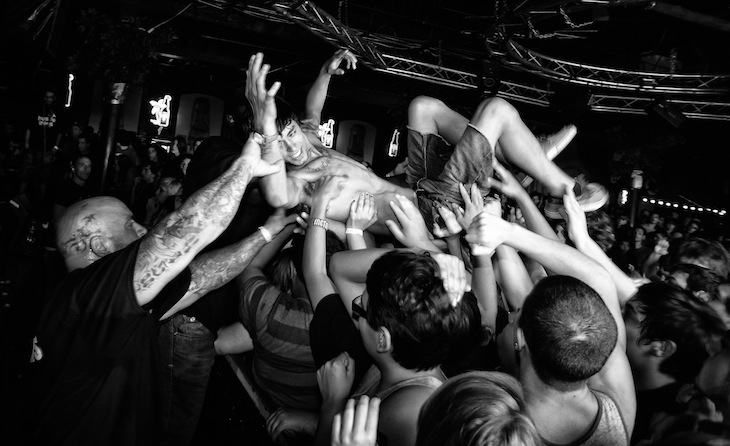 My Treble colleague Hanif Abdurraqib recently wrote a beautiful piece for Pitchfork called “I Wasn’t Brought Here, I Was Born: Surviving Punk Rock Long Enough to Find Afropunk”, and it hit me pretty deeply. In it, he describes what it was like growing up in a predominately white punk scene and the long journey he took to find a scene in which he didn’t feel drastically alone. Rather than butcher his story, I’ll just suggest that you press pause on this column and read that excellent piece. (I’ll still be here.)

I am white, and as such I’m not able to comprehend what Hanif went through. But, growing up a closeted queer who found some form of solace in the punk world, I know something about the irony of an “alternative” scene that can be just as exclusive and bigoted (if not more so, in some cases) than the mainstream world. Growing up as a punk kid, I also felt isolated when surrounded by homophobes and racists who considered themselves part of the punk scene. There were, of course, exceptions to this. I made many friends in my local punk scene in Houston, many of which turned out to be queer or otherwise radical in their own right.

But, as a kid, it was still tough for me to find a place to belong and, at the time, there weren’t safe spaces for me to be a weird, queer punk in Texas, at least not that I knew of. So I took to the internet and started collecting friends that didn’t suck. Most of these folks were friends-of-friends or people I met once or twice in my travels to shows, but some were complete strangers—like-minded kids that I met on Xanga or MySpace or whatnot. Then Facebook came along and I had a single place to keep all these contacts. Over time, I’ve curated a place where I am free to speak my mind and have a sense of community, even when my physical surroundings don’t have much to offer in terms of comfort. It’s not a perfect system (I don’t subscribe to capitalist ideals and you don’t have to point me to the ironies of building a community of queer weirdos on a publicly traded corporation’s number-one money maker), but it’s offered a way for me to feel supported when putting my true self out there.

As I revisit this aspect of my life with fresh eyes, Sleater-Kinney’s “No Cities to Love”, from their recent masterpiece of the same name, comes to mind as a perfect backing track. I’ll let you process that beast of a track in your own time but the basic takeaway is this: It doesn’t really matter where you are if you can find what you need to feel right in your skin. I’m grateful for the scrapbook collection of punks and weirdos that I’ve built up over the years and they never fail to lift me up when I’m feeling harshed by whatever’s out there muffing up my IRL.

In-depth rundowns of the five best punk tracks of August.

It’s not an accident that “And Then” plays out like a reworking of the old ’90s Kill Rock Stars approach to lo-fi riot grrrl; Maggie Vail has been at this game for a while, having spent close to two decades working for KRS and contributed her lion’s share to the label’s sound fronting Bangs. So if Hurry Up, her project with Thermals’ rhythm section Kathy Foster and Westin Glass, sounds like a bit of a throwback it’s because the trio wanted to tap into that tried-and-true sound to channel an anger they don’t always get to present outwardly. Along those lines, “And Then” is a calling card for the discontent and marginalized—old school Portland aggression for a new generation.

[from Hurry Up, out now; Army of Bad Luck]

Chicago’s Meat Wave have been piling a healthy dose of art-school ambiance to their punk since they kicked off their career a few years ago. But, if “Delusion Moon,” the title track from their SideOneDummy debut, is any indicator of what’s to come, the band is ready to step things up a notch when it comes to theatrics. “Delusion Moon” plays out like a punk rock interlude or prologue more than it resembles a traditional song, its percussive background resembling a two-minute breakdown and its melody remaining almost singular throughout the duration. But, for what it lacks in progression it more than compensates with forward progression when it comes to energy. Meat Wave seem like they’re hiding something, and I for one can’t wait to see what they have up their sleeves.

[from Delusion Moon, out Sept 19; SideOneDummy]

We’ve been conditioned to expect massive rock bands to be dark and brooding, or over the top with their sense of celebration. But The World is… play energetic ’90s-inspired emo-punk, but with an extra layer of complication and arrangement that necessitates a nine-piece act. As “January 10th, 2014” pushes through its song-stages, it begins like a slightly-more angular Death Cab For Cutie, but quickly morphs into a progressive, post-hardcore manifesto, drenched in as much aggression as it is masked in melody. The result is a cathartic-yet-casual conversation between the band’s two frontpeople, surrounded by an evolving rotation of evocative sounds: “How great/ that somebody’s doing/ what we should have done.”

[from Harmlessness, out Sept 15; Topshelf]

Brooklyn’s Haybaby throw together sloppy, sludgey pop-punk, and I mean that in the most complimentary sense possible. “Her” finds them straddling a line between the subdued pop of Waxahatchee and the hard punk of Screaming Females for a sound that’s as pretty as it is dark and powerful, with pop-songwriting chops that add a bit of flare to the equation. It’s spunky, garage-rock fun with just enough mystery to pique the listener’s curiosity.

This one’s a long time coming. Tender Defender are a not-quite-revival of sorts; a trio resurrected from the final quartet that made up New York melodic punks Latterman before their 2007 split. Almost a decade later, guitarist Phil Douglas, bassist Mattie Jo Canino and drummer Pat Schramm are back to their old modus operandi, spitting out punk that’s too angular to be pop punk but too damn catchy to be post-hardcore. Just as they did before, Canino and Douglas double up on inspiring, socially-aware lyrics but, on “Hello Dirt,” there’s a robust maturity to both their words and songwriting. At first glance, we have a coming-out-of-a-rut anthem that could apply to just about anyone, but peer a little deeper and there’s some dark stuff doing on that suggests recovery from a more traumatic event. It’s a deceptively fun song, picking you up for the ride before peeling through layer-after-layer of beautiful complexity.

Titus Andronicus‘ The Most Lamentable Tragedy: A three-LP rock opera to top the ambition of all of Patrick Stickles’ previous efforts, The Most Lamentable Tragedy is a deeply personal narrative about bipolar disorder, but also a sci-fi epic. It’s also, in both its thematic elements and songwriting style, a tribute to the (not so) late, great Daniel Johnston. If all that heavy thinking doesn’t give you a headache, the massive riffs and wall-to-wall energy sure will! (July 28; Merge)

Worriers‘ Imaginary Life: Full of to-the-point melodic punk anthems and storytelling, Imaginary Life marks Lauren Denitzio’s debut record of songs exclusively written by them. Played completely on their own, without accompaniment, these songs would still be as pointed and touching as possible, running the gambit from personal emotional struggles to more complex philosophies on gender binaries, identity politics and fear of authority figures. That’s not to say that they don’t have a hell of an assist from their excellent band and producer Laura Jane Grace, who shines up these beauties just enough for them to be visible from a distance. (August 7; Don Giovanni)

All Dogs’ Kicking Every Day: Ten perfect pop songs played by four punks who know how to make a melody stick in your head for weeks. This band has received a lot of attention for their affiliation with scenes that have been under the pop-culture microscope over the last year, but they were kicking ass before then and the extra attention hasn’t caused them to miss a beat. (August 28; Salinas)