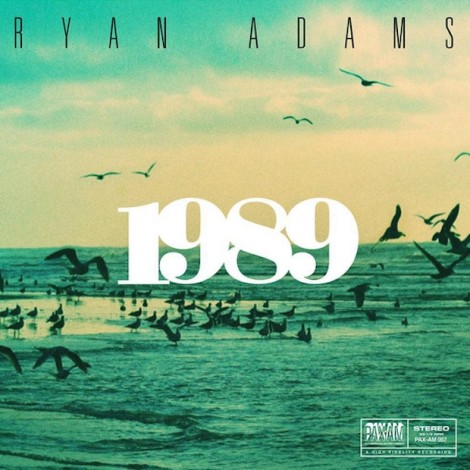 Last December, when Ryan Adams played a sold-out show in San Diego to a mostly well-behaved and mild-mannered audience at Copley Symphony Hall, he made up a song on the spot called “Ghostbuster.” The song came about as a misheard request from a fan, but instead of straining to hear whatever it was the guy shouted, Adams simply guided his band through a haunting ballad with a number of Ghostbusters references. That he pulled it off so ably made it an immediate highlight of the show—it was funny, spontaneous and well-executed. And if you needed three adjectives to describe Adams’ personality as an artist, those three will do the trick.

So of course he’d go and do something like record a song-for-song covers album of Taylor Swift’s 1989. There’s precedent for this kind of thing; about 14 years ago, Adams covered every song on The Strokes’ debut Is This It in his apartment with mostly mandolin and banjo. It’s one of the white-whale bootlegs in his catalog, of which there are many (there’s an ongoing fan game to construct the perfect album from his many unreleased sessions). But it doesn’t take too much work to find the other various tributes throughout his catalog, be it the live versions of The Grateful Dead’s “Wharf Rat” that he performed on his Love Is Hell tour, or the excellent cover of Alice In Chains’ “Down in a Hole” from his Follow the Lights EP.

That doesn’t necessarily mean that 1989 isn’t a publicity stunt; recording a covers album comprising songs by arguably the biggest artist in pop music right now has a way of attracting attention. But, easy as it might be to grow cynical of such a stunt, it’s also entirely in character for Ryan Adams to record a Taylor Swift covers album. I’m not sure if I’d ever put “Ryan Adams” and “poptimist” in the same sentence, but he’s also an artist prone to immediate impulse, and if Taylor Swift’s music is what feels good, then Taylor Swift’s music is the muse he’ll follow—to the point of dedicating more space for it than his somewhat more concise 2014 self-titled album. That Father John Misty followed up the same day of its release with his own mocking, Lou Reed-style cover of “Welcome to New York,” from the “classic Ryan Adams album 1989,” certainly indicated a heaping amount of cynicism behind the whole thing. But knowing Adams’ history, there isn’t anything surprising or even troubling about this.

Then again, considering how many of Adams’ recordings were either never released or only available on limited-edition vinyl, it’s hard to see why this one ended up getting a wider release beyond the fact that people are curious enough to see how he’d tackle some of the biggest pop songs in the country. For the most part, it sounds a lot like Ryan Adams by numbers, which is interesting, seeing as how they aren’t really his songs. He injects his personality into them, however, by way of 1980s Bruce Springsteen. In fact, his slow-burning cover of “Shake It Off” closely resembles “I’m on Fire,” which doesn’t sound like a coincidence. It also doesn’t make a lot of sense—why is a hater-shrugging anthem repurposed as a haunted ballad, unless we’re to believe that Adams is tormented by the criticism that he’s internalizing. Which might be his end goal, but I have my doubts.

Much of 1989 is highly enjoyable, however. Adams’ take on “Bad Blood” would be strong no matter what album it’s on, and his take on “Style,” which might be the best song on the original 1989 (come at me), is supercharged with ’80s rock energy and a winking Sonic Youth name drop. But it also just makes me wonder why this wasn’t released as an abridged 7-inch single? Most of these songs simply drift by like deep cuts from Easy Tiger or Ashes & Fire, and though in some ways they bolster the strength of the originals as pop songs, a lot of them are missing the spark and the energy. There are flashes of inspiration here, though definitely not enough to warrant the entirety of it. Part of me really loves that Ryan Adams released this album, but another part of me just doesn’t see the point. But it’s worth mentioning that Adams did succeed in one very important area: He got 1989 back on Spotify.