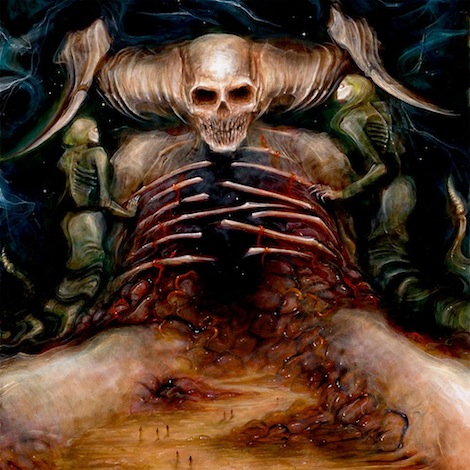 Horrendous is a young band that echoes an old sound. That’s the reductive way to look at it, but at least on the most basic level the Philadelphia band has fully embraced a style of music that was shaped a generation or two before they formed. Since the release of their debut album, 2012’s The Chills, the “New Wave of Old-School Death Metal” tag has followed them, despite being something of a contradiction in terms. It’s not an entirely unfounded description, however. Horrendous have studied the classics—Morbid Angel, Carcass, the Gothenburg scene—and they’d certainly ace the test were it administered today.

Here’s the catch: Old-school death metal is more of an aesthetic choice for Horrendous than an all-encompassing statement of identity. At the 1:08 mark on “Sum of All Failures,” the sixth track on the band’s third album Anareta, the group explodes into a hyper-speed gallop worth of classic Entombed or At the Gates. It’s a familiar rush of energy and abrasion, the forward rush of momentum headed toward what could only be imminent destruction. But just a minute later, it’s less about the surge and the crash, and more about the gorgeous orchestration of guitars that Horrendous commands, their harmonies less like those of Swedish death hordes of yore and more like the melodic showmanship of New Wave of British Heavy Metal-era bands. The irony? The collision of two decades-old sounds ends up sounding all the more contemporary and invigorating.

Horrendous isn’t the first band to build that bridge; Carcass did something similar with their landmark 1993 album Heartwork, and it’s easy to hear the parallels between the two records. Where Horrendous diverts from the left hand path is in how naturally their style of death metal takes to gigantic hooks and a soaring tunefulness while maintaining an almost punk rock rawness. The crunch and wallop that each of these eight songs packs feels vintage in a way, though the songwriting itself doesn’t. Leadoff track “The Nihilist” could, on a cursory listen, convince you that you were listening to something from death metal’s heralded archives. But a closer examination reveals something with more complexity in the way it weaves together harshness with a surprisingly mellifluous sensibility.

There’s a moment in almost every song on Anareta where Horrendous transitions from a familiar death metal sound to one that transcends it. On “Ozymandias,” it arrives about halfway through, with an entrancing sequence of descending minor chords. The instrumental standout “Siderea” shifts back and forth between moments of roaring chug and flights of lightning fretwork that are as much a testament to metal’s tendency toward musical extremes as they are to Horrendous’ own embrace of traditional beauty in a genre that so frequently eschews it. And “Acolytes” pushes that idea even further, its speed and intensity growing in concert with the melody itself, cascading in a hellish psychedelic spiral at five minutes and climaxing with the sound of absolute triumph at six.

The fascinating thing about a band that so frequently punctuates their songs with moments of euphoria is that they tend to only happen once. “Stillborn Gods,” for instance, is one song concise and direct enough to almost pass as a single in the conventional sense. But its labyrinthine structure of various movements, passages and diversions ensure that it never actually entirely resembles a standard pop song. Horrendous, despite a name that warrants too-easy puns, are operating on a level too sophisticated for mere nostalgia. Death metal’s flirtations with ambiance or accessibility can sometimes come at the expense of the visceral, back-to-basics rawness that makes the old-school sounds hit with such a profound impact, but Horrendous makes the proper correction. Anareta hits the pleasure and catharsis centers simultaneously at full force.