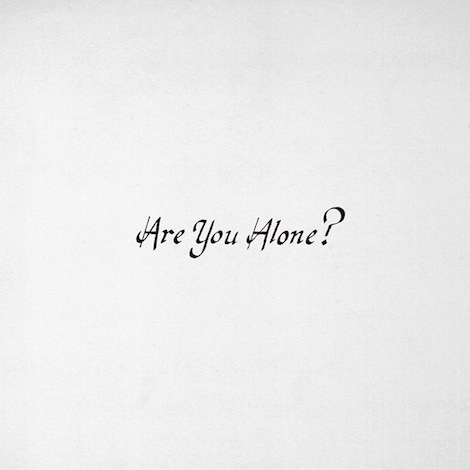 Going inward in popular music takes a lot more guts, or at least a lot more commitment, than straight-up extroversion. Generally you’re expected to just talk about the fact that you’re being released, not what you’re being released from. That’s why Majical Cloudz, in concept alone, are a station of relief. Unremittingly emotional and nearly crosstalk-free, the second full-length from the Montreal duo is almost guaranteed a devoted audience looking for accompaniment to questions that are hard, or at best mawkish, to ask. Are You Alone? is a study in sentimental expansion and withdrawal, as close to breathing lessons as most electronic-based music gets.

Singer Devon Welsh has one of those understated, everyman voices that fetches a fine melancholy through its evenness; it’s got the twiggy centeredness of Death Cab for Cutie’s Ben Gibbard and the drawling retirement of Dean Wareham. When paired with some providently designed electronic mist from partner Matthew Otto, Welsh’s direct and perplexed lyrics don’t sound nearly as lost as they read. He may think he has one foot dangling out of the Clapham omnibus but nobody’s falling out anytime soon.

The result is measured confessional music that’s a few inches off the floor. “Remember when we used to say “I don’t know” and it was okay?” Welsh sings in the pensive opener “Disappeared,” and he states the implicit point of the album directly afterward: “All I want is for you to talk to me the way you used to do.” It’s a validation of a tender segment of the modern audience, the ones whose dreams have already gone through two lifetimes but whose beings are still very young. They’re in limbo between craving and repelling your appeals or your bullshit.

As such Welsh’s lyrics are shorn of excess and overkill. “I will be honest: I am afraid of love” he sings in “Silver Car Crash,” the album’s only jarring song, its (curiously) first single and the latest reference of J.G. Ballard’s car-accident-fetish novel Crash. Welsh’s approximation of the corruptive twins passion and violence isn’t unique in itself (“I want to kiss you inside a car that’s crashing/And we will both die laughing”), but Otto’s constantly contracting and expanding synths—the album’s most obvious trait—creates such an insulated universe that you really believe the singer feels he’s the first one that’s discovered it.

That weird combo of juvenescence and decline is the source of Majical Cloudz’s power. “So Blue” mainlines a suspending piano figure with a single Farfisa-type organ and dictated keyboard swells, with Welsh’s lyrics pared down to their utter bone (“Blue moon/In the rain/I wanted to say/I need you”). It’s almost satirically simple, but it’s striking and binding, possibly the album’s best song. Otto dials the percussive elements way down; they’re usually just muffled, metronomic kick drums and never get more aggressive than the stopwatch pulse of “Heavy” and “Change.” They renounce the wanton and go straight for the out-of-body experience.

Music that exists in Majical Cloudz’s half-dream terrain runs the risk of sounding tentative, and Are You Alone? briefly approaches that indefinite state. By the time “Game Show” comes up Welsh’s lyrical austerity sounds a bit gaunt (“You make a show out of your feelings/Tell me, do you feel it too?”); you get the faintest inclination that he can’t transcend his cobalt disharmony. But Otto’s structured atmospherics are so clued into his character’s contractions and dilations that they stop clichés from ever truly forming. Are You Alone? is truthfully more fog than clouds. Personally I prefer fog, because you can walk through it.