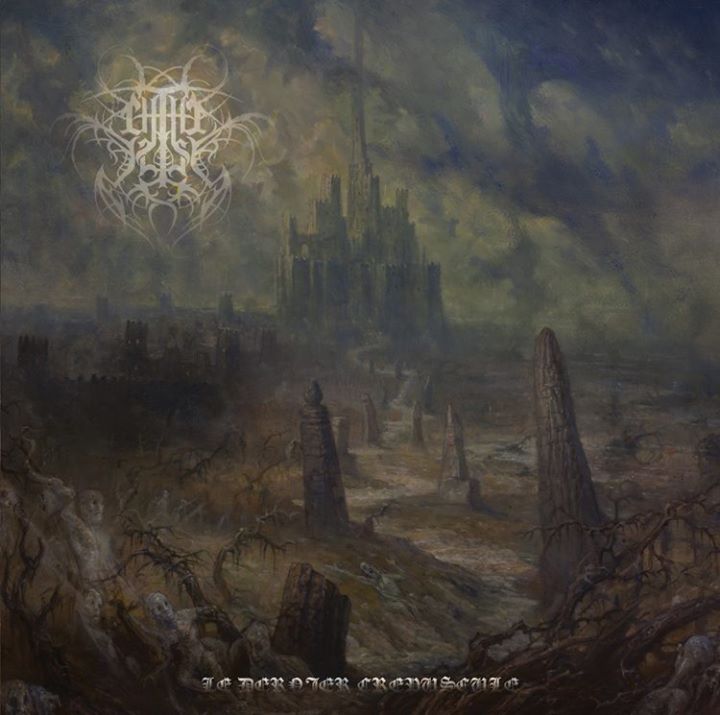 When death metal achieves a sound so vicious and ugly that each riff feels like a blow to the torso, it’s an impressive testament to a band’s commitment to what it means to be “extreme.” But when death metal can sustain that level of physicality while also developing a unique sense of mystique and melodic character, it becomes something much better. Therein lies the real challenge for making death metal interesting three decades after its inception. You can be brutal, or you can be melodic, but being both requires a level of balance and compositional vision that’s not always so easy to capture. Yet to ratchet up the intensity on death metal’s ugliness while treating it with some truly majestic melodies, as Quebec’s Chthe’ilist does on their Profound Lore-released Le Dernier Crépuscule, is a rare feat.

Chthe’ilist, whose members are young enough to have been born around the time Death released their fourth album, have a unique take on death metal. There’s little crossover appeal in their presentation—their Lovecraftian name, frequently unprounounceable song titles (see: “Vecoiitn’aphnaat’smaala”) and affinity for Finnish underground sounds of the early ’90s ensures they’ll never be confused for the next Mastodon. And yet they’re weirdly accessible throughout much of their full-length debut. Take that absurdly long, impossible to say track, “Vecoiitn’aphnaat’smaala,” whose 50-second mark unveils a brief but irresistibly gnarly groove amid moments of rhythmic chaos, bowel-rumbling riffs and Pat Tougas’ ogre-like growl. It’s not catchy really. In fact, a lot of it overwhelms before you can truly make sense of where it takes you. Yet it’s compelling all the same, worthy of a second listen even when the first one feels like an ecstatic clusterfuck.

What separates Chthe’ilist from bands such as Portal or Gorguts, whose mathematically warped take on death metal feels connected in some ways, is in how their songs reveal themselves more readily, and whatever obfuscation exists in these compositions proves to be a fairly thin veil. Take “The Voices from the Well,” which is as frantic and merciless as anything here, but actually kind of a righteous jam. There’s slap bass, for one thing, which enhances the semblance of groove it carries. But it’s much more than an appearance of groove; around five and a half minutes, Chthe’ilist gallops mightily with a riff that’s more Sepultura than Suffocation. Hell, it’s kinda fun.

“The Voices from the Well” isn’t a rarity here, either. “Voidspawn,” which caught my ear in late 2015, is even more immediate, thanks to its ethereal synthetic demon-choir treatments and towering opening riff. And the closing 13-minute monolith, “Tales of the Majora Mythos Part 1,” opts for moments of pure beauty where much of the album is an exercise out of making ugliness accessible and, alternately, making melody as grimy and gruesome as possible. Chthe’ilist are excellent musicians, and death metal bands typically have to be. It’s as physically demanding as genres get, though Chthe’ilist understand that’s not the entirety of what makes great death metal. You can get by on superhuman feats of instrumentation, but those feats are far less laudatory without some excellent songs, like those on Le Dernier Crépuscule, to back them up.