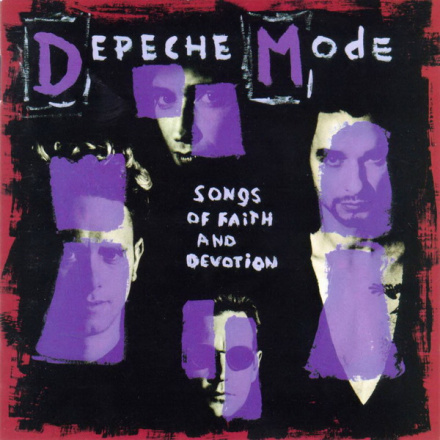 Welcome back to Remake/Remodel, the weekly column in which one of Treble’s editors or contributors takes a classic—if imperfect, to our ears—album, and proposes an alternate tracklist in an effort to provide a different, albeit highly enjoyable listening experience. This week we tackle the ambitious, kinda grungy 1993 Depeche Mode album, Songs of Faith and Devotion.

One thing that I think is worth noting as we get deeper into the Remake/Remodel process, is that we, in general, like all of the albums we’re writing about. They’re not irredeemable (though that last one came close), they just might work better in a slightly different order, with some slightly different tracks. Take Depeche Mode’s Songs of Faith and Devotion for example: On an individual song basis, there’s some excellent material here. “Walking In My Shoes” is one of the all-time best Depeche Mode songs, and deeper into the tracklist there are other gems to be found. The first problem with the album is that there’s an overarching theme that sometimes inflates the drama a bit too much, even for Dave Gahan’s own good. The second problem is that there’s a fair amount of filler, and it’s sequenced in such a way that the energy deflates a little too soon. On the original album, for instance, the two big singles are placed back to back as tracks one and two, which gives away too much too soon. By comparison, two of Violator‘s singles were on Side B (the two best ones, actually). You need something to build up to.

The other thing about SOFAD is that, on the surface, it seems like a concept album with Biblical themes, which it is, sort of. But there’s no real storyline to speak of. Also, Dave Gahan sort of looked like Jesus at the time, so he just sort of went with it. So without a specific narrative thread, there’s no reason to keep the sequence intact, and I didn’t. But the songs, for the most part, are there. They just needed a closer look and a nip and a tuck. And perhaps a few new pinch-hitter tracks to substitute in. The resulting album is one that feels like a classic Depeche Mode album, even kind of like Violator, which is widely recognized as their strongest hour. This maybe isn’t quite that strong, but it’s closer than it started with.

Let’s take a look and have a listen to the Depeche Mode Songs of Faith and Devotion alternate tracklist.

I don’t really care for remixes usually, but I like the dramatic build of this, from a haunting dirge of sorts into a much bigger track. It builds tension better than the noisy blast of “I Feel You,” and while Depeche Mode almost always drop a single at track one, I’d prefer to take the “Black Celebration” route and start off a little slower.

But not too slow. This track always seemed like a perfect fit at track two. Whether or not it’s as timeless and powerful as “Enjoy the Silence” is debatable, and most would probably say “no it isn’t.” But it’s close, and I like this small piece of instant gratification as it is, right here.

So, one of the problems with the sequencing on the original album is that it goes from two singles to a ballad. I like “Condemnation,” but when you build up so quickly just to deflate it, the album loses a lot of momentum quickly. So, let’s keep it turnt up.

My goal in sequencing this album was to make it flow more like Violator, which is a perfect 10. (Don’t argue with me, it is.) So why not pluck a b-side from that era? The Violator b-sides are better than the SOFAD b-sides anyway. I almost placed “My Joy” here, but it doesn’t really work well with others. “Dangerous,” however, is subtler and more brooding, and almost worthy of being a single itself.

The average Depeche Mode album has two songs fronted by Martin Gore, compared to seven or eight fronted by Gahan, but in this case, I only kept one. “One Caress” is rote Gore, basically just “Blue Dress” or “I Want You Now,” rewritten. And we don’t really need a third one of those. “Judas” is a much more interesting song that gets fleshed out properly into something bigger and with more depth. So it’ll close out what’s ostensibly side one.

OK, now we get to this one. It seems like a good start to the second half, like the hangover after the previous side’s indulgence. Or the confession after the sin. And though Depeche Mode really ran the religion thing into the ground after a while (“Personal Jesus” is 26 years old, just for reference), this is a gospel motif used really well.

Here’s a fun, noisy one, Depeche Mode playing a bit more at being Nine Inch Nails. And it works pretty well, actually. They did more of this sort of thing on Ultra (and pretty well, too) but this might be peak-industrial-rock DM.

This is a fine song, but as a closer, it seems a bit on the nose. But maybe we sequence the album like a live set. This is what seems like the closer—a longer, slower, more introspective track to bring the lights down.

But then we get the encore! And the noisy screech at the beginning, with “In Your Room,” returns anew with this bluesy banger. It’s more or less “Personal Jesus Part Two,” but if it ain’t broke, don’t fix it. A rockin’ closer with energy and a sense of fun that the actual closer misses out on.