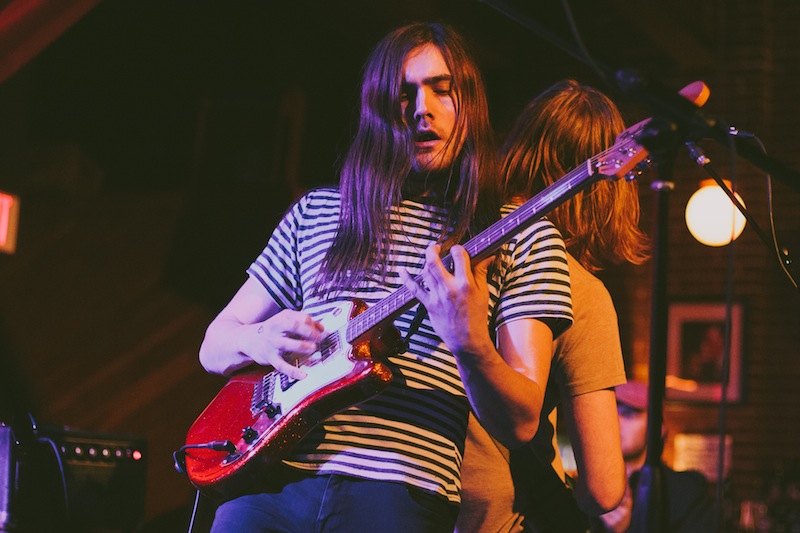 Somewhere between the fourth or fifth guitar solo during their headlining show at San Diego’s Soda Bar in April, Diarrhea Planet restored my faith in indie rock. The Nashville-based band, whose personnel includes four fucking guitarists and whose name ensures they’ll never suffer the indignity of going mainstream, took all the reservations and doubts I had about indie’s descent into mediocrity and smashed them into a thousand pieces on the floor, danced upon them and ripped a sweet guitar solo while doing so. I was wide-eyed and smiling at the spectacle—I was positively giddy. Just after one of the band’s quartet of guitarists informed us that the next song was about racing God on dirtbikes after you’re dead, a friend of mine leaned over and said, “I think they’re secretly the best rock band in the world right now.”

If he’s wrong, it’s only because we’re lucky enough to be alive while Savages exist. Just a few days after Diarrhea Planet’s surge of euphoric guitar rock, I experienced—for the third time in a little over a year—Savages’ powerful, invigorating and thoroughly cathartic live show. Frontwoman Jehnny Beth, a showstopping frontwoman with a winning intensity, walked on the audience’s hands like punk rock Jesus, her bandmates tearing through their own post-punk acrobatics to deliver 90 minutes of the most cleansing guitar-based music I’ve heard since, well, the last time I saw Savages. Which led me to remind everyone on the Internet that they’re the “best fucking band on the planet.” I’m pretty sure I’m not wrong about this, either. I mean, argue if you want, but that’s not the mic drop statement of it all. The real revelation here is that indie, after yawning out several years’ worth of insular malaise, has finally learned to rock again.

For a while, Savages’ Adore Life was the only hope I had for indie rock, its 10 elegantly serrated tracks an oasis of brackish brilliance in the center of a landscape barren of energy, passion or purpose. And if that’s all 2016 had to offer, that’d be just fine. If the rest of the indie class was still snacking on chillwave’s lukewarm sloppy seconds—the nebulous navelgaze of Diiv, the sleepy jangle of Day Wave, the too-pleasant-to-be-psychedelic pop of Sunflower Bean—at least there was solace in Savages. But soon enough Parquet Courts injected a much-needed dose of Wire and Television into Human Performance. And White Lung resumed their regular program of going for the jugular on Paradise. It’s almost an embarrassment of riches—I’m hesitant to say it’s an indie rock comeback, but fingers crossed—and it’s overdue, to say the least.

I don’t think I’m saying anything terribly shocking by stating that indie rock’s been in some dire straits, musically speaking, for a couple years. Where once its greatest sins were in absence of fidelity or polish, the opposite is now true. In 2015, our standard bearers of indie rock are those who’ve mastered pleasantness as a key aesthetic and politeness as a necessary approach. For how much growth Beach House has shown since 2008’s Devotion, it’s hard not to hear Depression Cherry as pleasant background music. And for a band that once reveled in provoking their audience, Deerhunter sounded unusually housebroken on the more softly melodic Fading Frontier (which I liked, but still). Even Tame Impala’s Currents, a kaleidoscopic work of ambition to be sure, lacked the harder hitting moments and sharpened edges of past albums. There’s nothing uneasy or abrasive about any of these albums—no climaxes, no impacts, no edge. They’re nice to listen to, but past a certain point, nice just isn’t enough.

Tame Impala and Beach House aren’t necessarily the first bands I look to when seeking an adrenaline fix, but where once indie’s heroes were those whose guitars squealed the loudest (Sonic Youth, The Pixies, Dinosaur Jr.), what we’re left with now are a glut of bands seemingly competing to write the best lullaby. And they already all lost anyway, because all 13 of them are on Yo La Tengo’s And Then Nothing Turned Itself Inside Out. There are teenagers in garages in every city in America banging away at power chords on cheap guitars—I was one of them!—but somehow that urge to play loud and let out something primal was replaced by a humble agreeability. I’m not looking for a revolution, but I need music that can muster something more than a shrug.

I’m not the first to complain about how unsettlingly uninspired indie rock’s direction has been of late. “It’s hard to find progress in music as woefully familiar as this,” laments MTV’s David Turner about Diiv’s Is the Is Are, an oversized sweater full of undercooked dream pop. Later in the same article, boasting the headline “Is Indie Rock Over the Male Voice?”, he shakes his head at “a generation of bands that make music that could easily fade into the background if you don’t keep the volume high enough,” which certainly includes bands like Diiv, but goes back at least as far as Death Cab for Cutie. Noisey’s Zachary Lipez’s critique of indie rock’s overbearing okayness offers a more emphatic call for rebellion: “I want total destruction, not bland reinforcement.”

In fact, just a month ago, I offered my own thoughts on the dismal state of rock’s mainstream by suggesting metal has usurped its throne, but it’s not as if rock’s underground has had much better of a showing. So much of what’s gushing out of indie labels is severely lacking in musical firepower, though not necessarily emotional ammunition. How to Dress Well, Majical Cloudz, Porches and the Patron Saint of SadBros, Bon Iver, have perpetuated a kind of quiet melancholy that makes a concerted effort not to offend. And yet, hearing Bon Iver certainly bums me out. I won’t go so far as to say there’s no value in a softer kind of sadness, but it’s hard to find a satisfying form of catharsis when you can’t turn it up and scream it at the top of your lungs. Which is why my fuck-this-shit drug of choice is so often metal.

Pinpointing a reason for the recent drop in excitement in indie is really just a broader symptom of a bigger, long term change. The reason that indie rock ever rattled cages and made a mess of anyone’s stereo in the first place is because it presented a counterpoint—an “alternative” if you will—to the mainstream. But now commercials are twee and Sub Pop artists are on Starbucks playlists and LCD Soundsystem (reunited after five years) headlines Coachella. And it’s been that way for a long time (except the LCD Soundsystem reunion part). Indie rock became easy listening because that’s what the market wanted.

But, you know, fuck the market. Exciting music doesn’t happen as a means of appeasement, it happens because of restlessness—out of a feeling that the artist has no other choice but to make that music. I don’t know Savages or Parquet Courts or White Lung personally, but even if they’re just selling me the illusion of exorcising something raw and intense from their very souls—which is hard to fake—it’s an illusion I’ll gladly buy into. In the case of Diarrhea Planet, at least 50 percent of that is just raw showmanship, but that’s something indie’s always had a problem pulling off convincingly. If a four-guitar band named after an orbiting ball of feces can convince 150 stoked, half-drunk people in a bar that it’s the best band in the world, then maybe there’s hope for indie rock after all.