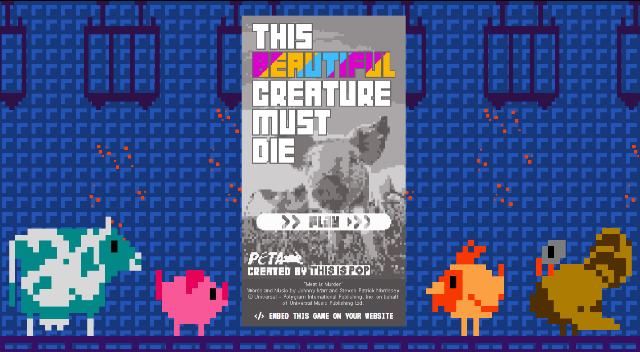 PETA and The Smiths have teamed up for a new flash game called “This Beautiful Creature Must Die,” inspired by Meat Is Murder. The game is sound-tracked by an 8-bit version of “Meat Is Murder” and features a player controlled, tower-defense-like gameplay. Players take on the role of savior for doomed animals, rescuing them from the perils of what seems to be a combination slaughterhouse-bomb-manufacturing facility. You can’t actually win the game, which means each challenger will inevitably come to the dismal slogan in the loss screen: “Death for No Reason.”

Smiths frontman Morrissey, a notoriously hardline vegan and longtime animal rights activist, encourages fans to grasp the message behind the game. “This game is the biggest social crusade of all, as we safeguard the weak and helpless from violent human aggression,” he says. “You don’t get that from Pokemon Go.”

Grab yourself a ham sandwich and play a quick game of “This Beautiful Creature Must Die,” below:

Read our Remake/Remodel article on The Smiths’ Meat Is Murder, which notably omits the title track.