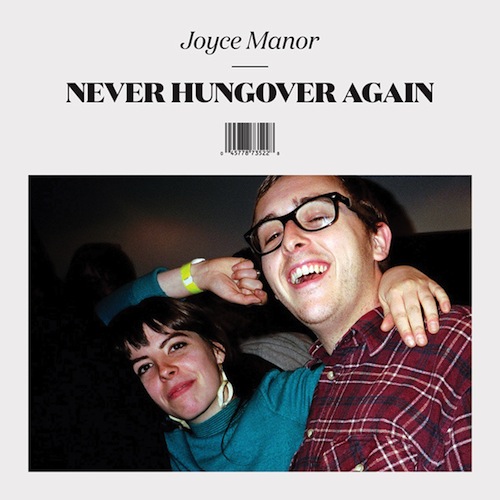 The body of punk must look something like maggot-rotted bruised horse by now. What was once at the forefront for anarchy and rebellion has now hilariously become a beacon for Xbox Live gamertags and MTV archetypes (hint: the one who rocks a Green Day shirt is hardcore badkid™). And while many diehards scream out that “punk’s not dead,” shirts saying just that produced by Ed Hardy of all things prove just the contrary. The sad truth is that while punk’s not dead, it’s not cool anymore. But that’s okay, punk’s direct sonic assaults were never meant to last and more importantly, the spirit is still more than willing. 2014 has been nothing short of brilliant for these punk-tinged releases: Against Me!’s latest was probably the most punk statement in several years; The Hotelier gave the emo-revival another vibrant shot in the arm; and The Front Bottoms provided an arsenal of deeply personal and sharp summer anthems.

The best of them, however, might be Joyce Manor’s latest, Never Hungover Again. After two full-lengths, Joyce Manor have quickly become one of the best and most interesting bands out of the west coast scene. Their sound lies somewhere between a summer’s backporch and The Smiths, of all things, fully embodying the punk spirit. Opener “Christmas Card” will likely make you check your music device to make sure you didn’t somehow to skip to the middle of a song because it starts with no introduction, not that it needed one. It’s middle-paced and, all things considered, doesn’t really move all that much and yet it still ends up being a brilliant exposition to Joyce’s quiet fury. It’s easy to imagine drunken realizations like, “found the keys to the truck/saying, ‘isn’t that enough’” being screamed to a crowd of nine or so in some dinky basement somewhere in suburbia. The lack of exposition is a recurring theme throughout the record, with songs seemingly starting out of nowhere and fixating on that one spot. It’d be frustrating and, dare I say, boring if everything didn’t sound so catchy and fun. “The Jerk” and “Heated Swimming Pool” move like an airy breeze thanks to The Smiths-leaning guitars and “Catalina Fight Song” just might be enough to get those apathetic arm-folders into the pit. Joyce have mastered the art of sounding eager and honest while never really giving into their suburban demons.

In a way, Joyce Manor have become innovative by fully moving with the current, rather than against it. The subtle use of synths, the stagnant structures, the endless amount of hooks (seriously) all help create a brilliant album that’s built upon genre conventions rather than aspiring outside. The result is an incredibly fun and vital listen that, like your buddy’s kegger down the street, ends entirely too short. At just 19 minutes long, Never Hungover Again easily earns several spots on the obligatory summer playlist.