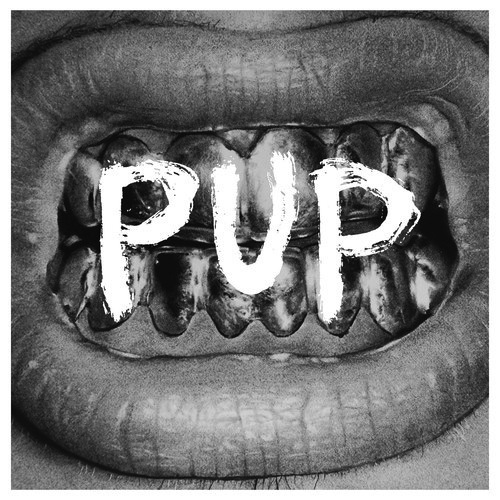 You can get a pretty good idea of what PUP is all about just by observing the company they keep, or the heroes they champion. The Toronto-based band has shared stages with punk rock headliners like Against Me! and Fucked Up, and have even been joined onstage by the latter’s gregariously barking frontman, Damian Abraham. And earlier this year, the band released a cover of Jay Reatard’s “My Shadow,” which came accompanied by a note about the quality the band most admired about the late Vancouver musician was his “craftsmanship.”

If all that tells you about PUP is that they’re a punk band, then you’re only half paying attention. Indeed, PUP is a punk band, but one — like their tourmates and influences — that places a great deal more importance on the songs they write than the image they project or the number of bruises they cultivate onstage. To be sure, this band rocks — and rocks hard! But there’s a lot of sophistication on the PUP self titled SideOneDummy debut, gold teeth on the cover notwithstanding.

Like Against Me! or Fucked Up, PUP use their volume and overflowing energy as a means for propelling their outstanding melodies, the likes of which are both plentiful and pristine. In fact, Fucked Up’s “Black Albino Bones” from 2008’s The Chemistry of Common Life is a pretty strong point of comparison to the group’s work — catchy, loud and just on the verge of being a radio hit. The thunderous opener “Guilt Trip” could be the heaviest song Weezer ever wrote, while hard-chugging “Reservoir” blasts through the easy pop hooks to deliver a more menacing punk rocker in the vein of Hot Snakes or Metz. And the utterly infectious “Lionheart,” complete with “whoa-oh” sing-along, seems very likely to burst through the radio barrier.

As loath as I am to label PUP with an arbitrary “emo revival” tag, one other characteristic that the young group shares with the last decade’s better punk acts is a healthy balance of detailed songwriting with emotional resonance. The first line on the record is “How many times have you lied to my face?!”, a bemused confrontation that vocalist Stefan Babcock later counters with, “If I was drunk when I said it, it was probably true!” And on “Yukon” — one of a few rare ballads — Babcock name-checks Canadian locales like the Yukon Valley and the Athabasca Delta on a tour through some personal wounds, scored brilliantly with a bluesy strut. PUP doesn’t just accessorize with emotions; at their best, it feels like everything is on the line. It’s to their credit that their chosen coping mechanism is turning those raw, visceral feelings into something that feels good even when the occasion doesn’t call for catharsis.