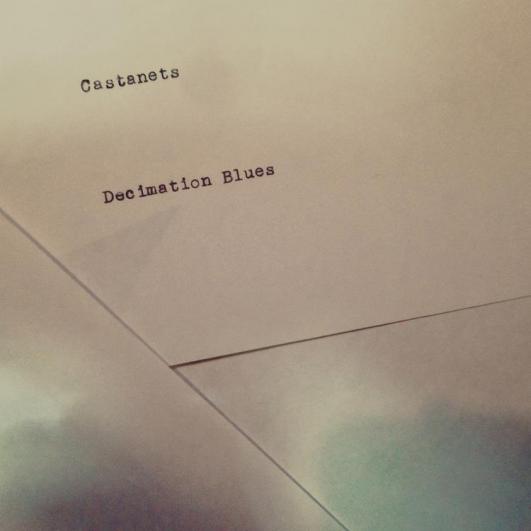 Between 2004 and 2009, it would not have been unreasonable to call Castanets‘ Ray Raposa prolific. The Portland-based singer/songwriter — formerly of San Diego (don’t think we’ve forgotten) — released five albums in six years, starting with the haunting masterpiece Cathedral, and closing the decade with the eclectic and cool Texas Rose, The Thaw and The Beasts. And though few of Raposa’s songs moved at a brisk pace, he himself kept them coming at an impressive clip, every year or so issuing a new set of eight to 12 songs to recapture a darkly romantic feeling, a haunted sense of enchantment through gentle, often barely-there melodies. It was more than a gift — you might call it a compulsion.

If your only benchmark of Raposa’s creative output is Castanets, however, then it’d be easy to think he went AWOL come 2010. That’s partially true. Between 2009 and now, the Castanets name seemed all but retired, Raposa’s only official release in that time being a one-off under the name Raymond Byron and the White Freighter. And if we’re being upfront about everything, here, that was essentially a Castanets album. Yet, it still feels like something of a relief to finally see Raposa make it official for the first time in five years.

That release, Decimation Blues, in many ways picks up where Raposa’s past releases left off. His warmly reedy vocal tones are unmistakable, and when he shakily sings a line like, “The days are short and the night ain’t so bad/ Out in the valley I can hear the last of the trains/ On the porch I can hear her calling out my name,” it’s as if those five years never passed at all. But the arrangements on the album tell a different story altogether. On a purely musical level, Decimation Blues is the weirdest album Raposa has ever released. Here, he’s having fun with the instrumentation at his disposal, and while the Duane Eddy-style reverb guitar on “To Look Over the Grounds” seems entirely within character, the ghostly backing vocals and crystalline synthesizers are a left-field contrast. The organs and soft-touch drum machines in opening track “It’s Good To Touch You in the Sunlight” lend an Eels-like playfulness to its curious darkness. “Be My Eyes” sputters with arcade table-top Centipede percussion, and the only thing more jarring than the hyperactive, explosive effects that erupt during “My Girl Comes to the City” is the refrain that lends the song its title: “My girl comes to the city and she beats me up.”

So much of what made Raposa’s music so compelling on past releases was just how subtle it was; he might eventually reach a powerful climax, but the road that led to it would inevitably be dangerous and uncertain. Here, there’s still plenty of certainty, but the journey feels a lot more like a carnival funhouse than a dusty desert road that disappears over the horizon. The unifying quality that bridges Castanets’ earlier, subtler albums and this new, art-pop oriented material is Raposa’s voice. He’s not just the human element, he’s the architect, and as much sonic bric-a-brac is strewn about, it’s still his knack for melody underneath it all that endures.

Ten years ago, I interviewed Raposa after an outdoor concert, at which Castanets’ songs could barely even be heard under the din of drunk hipsters and socialites. But, while he acknowledged the chatter, it didn’t seem to bother him that much: “You don’t want to mope in front of people for a half-hour.” With Decimation Blues, that threat no longer seems like a concern.

Castanets : Texas Rose, The Thaw and the Beasts