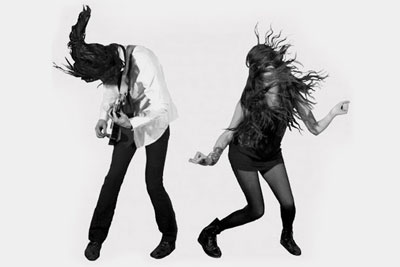 Half the summer has lapsed, and a wide swath of the United States is being treated to record high temperatures. We can’t do anything about that, but we can offer some suggestions to add to your summer playlist. Funny thing, though, a good many of the songs on our latest Album of the Week mix are eerie, ethereal and haunting. But then again, Cults, Fucked Up, Junior Boys and Hooray For Earth bring the party jams in their own unique way, so whether you’re ready to pull a ghostly all nighter or throw an awesome barbecue, we’ve got you covered.

What we said: A first listen to the opening title track may very well lead the listener to do a double-take; its smoky noir groove and hypnotic rhythms share little in common with the band that once cranked out the Motorhead-style anthem “Statement.”

What we said: At just over seven and a half minutes, the song is truly a multi-part stunner containing some of the most striking melodies on the record.

White Denim – “Anvil Everything”
from D

What we said: The dueling triplets of “Anvil Everything” give way to a trippy but melodic highlight, which segues into a tropical instrumental breakdown just a little before the three-minute mark.

Fucked Up – “Queen of Hearts”
from David Comes to Life

What we said: “Queen of Hearts,” which ignites the album following the instrumental intro “Let Her Rest,” is an absolute punk rock wonder, its hook-laden chorus finding frontman Damian Abraham and Cults’ Madeline Follin (who plays the part of Veronica) entwined in a lovelorn call-and-response

What we said: Kicking things off with “Abducted,” Oblivion and Follin trade off on vocals in a classic 60’s pop song updated with shimmering synths.

What we said: Roaring out of the gate with “Itchy Fingers,” the duo announces their return with one of the highest energy songs in the band’s catalogue.

What we said: On a track such as the outstanding “Sails,” the band wraps an affecting anthem around rapidly firing and flashing keyboards, a sound built for stadiums or warehouse raves, but encapsulated in a tightly crafted pop song.

What we said: After each verse recounts a setting, a memory, Vernon chimes in with the most poignant chorus of the record, crooning, “And at once I knew, I was not magnificent…”

What we said: There are points at which this record is a mimetic approximation of watching your mind go, of hearing a melody and having a faint feeling of having heard it before but not being able to place it, even if it may have just played two tracks earlier.

What we said: The stunning closer “Swerve… The Reeping of All That Is Worthwhile (Noir Not Withstanding)” begins with a repetition of “If you talk about it, it’s a show/ but if you move about it, it’s a go,” later launching a verse with “Dynamic, electromagnetic styles!”

What we said: “…And the Rain” leaves its chorus thrumming on the surface of the brain, its choral fields of starry synthesizers and rolling basslines hanging in the room like so much dreamlike violet fog.

What we said: There are, however, a handful of moments in which their penchant for accessible structures and penetrating melodies catches up to their caffeinated vivacity. “Broken Bone” is one such moment, opening with a dissonant progression before soaring into a Clash-worthy chorus in which Elias belts out some infectious “ooooh”s

What we said: “A Devil Lay Here” may be my favorite thing on the record, its snaking, bassy synthline twisting and turning around a dazed melody that drives itself forward into the shadows.

SBTRKT – “Trials of the Past”
from SBTRKT

What we said: SBTRKT’s efforts thankfully stay on the right side of that fine line where the processes of electronic music could look embarrassingly easy, and the final results could sound generic and interchangeable.

The Men – “Bataille”
from Leave Home

What we said: For a band with such affection for all things deafening, they nonetheless have a way with melodies, and simple ones at that, offering a fine example of how accessible sonic annihilation can be.

What we said: Early single “Ffunny Ffrends” kicks off the album with an off-kilter swagger and a sunny disposition, its hazy guitars ringing beneath Nielson’s effects-treated falsetto in a confluence of perfect sunny day elements.