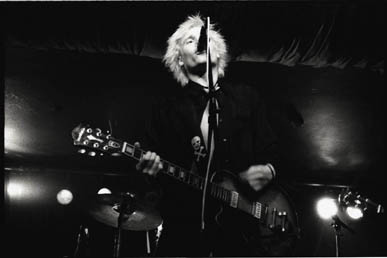 I learned a lot of things on the night of June 12, 2005. First, I learned that despite all the weird “character” on the walls of the House of Blues San Diego, it’s actually a somewhat toned down version of the other clubs in the nationwide chain. Second, I learned that some people will do anything for attention. Third, I learned that drinks in said venue are not cheap. And lastly, I learned that Amusement Parks on Fire totally rock live.

I managed to make it inside after APoF’s first song, able to catch most of their set in an opening gig for The Kaiser Chiefs. And from the get go, I was impressed. The band may not have been particularly animated, though frontman Michael Feerick did have some interesting moves. With nappy Peroxide blonde hair draping his head, Feerick looked more like Kurt Cobain than Kevin Shields, frontman of My Bloody Valentine, the band that Amusement Parks on Fire is most often compared to. Feerick moved a lot like Cobain as well, swimming on stage with his guitar, rising and cascading like a slow motion stunt pilot, moving ever-so fluidly along with the band’s hazy shoegazer rock.

Charging through super-loud and super cool songs like “88,” “Venus in Cancer,” “Wiper” and “Venosa,” Amusement Parks on Fire, were, to put it bluntly, on fire. But they also played it cool. While a trashy, pantiless tart flailed her arms at Ferrick (this is the part about needing attention), he simply shook her hand and got back to the rocking. At this point in the show, there were still a good number of people who had yet to show up, leaving the joint reasonably vacant. Nonetheless, about 100 of us were smart in coming early, as we caught sight of one of England’s most interesting new bands.

Afterward, The Kaiser Chiefs did put on a great show, after a way-too-silly dance routine by second openers Ok Go. Between sets however, my compatriots and I imbibed nine dollar Grey Goose vodka tonics, which, admittedly, was a little indulgent. We here in San Diego are used to paying $3.50 for a comparable, if not quite as chi-chi, drink at the Casbah. But it doesn’t matter really. We were just happy to be able to have witnessed a good show, and discovering just how wondrous Amusement Parks on Fire truly are.

**note – photo is not from this performance