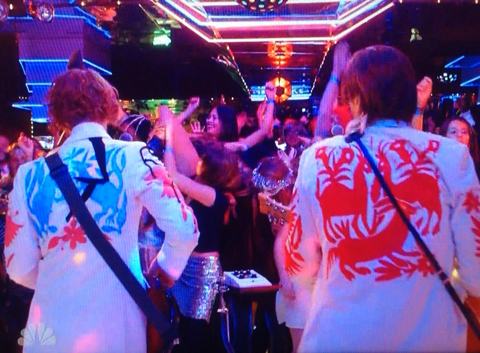 Between performances on Saturday Night Live and a half-hour special that aired afterward, Arcade Fire debuted a total of four new tracks from their upcoming album Reflektor on NBC Saturday night.  The songs, played live by AF and a small army of back up percussionists, follow in suit of the album’s previously released single, boasting angular synths, retro guitar-work, and driving rhythms.

Check out the group’s SNL performances of “Reflektor” and “Afterlife” on Hulu, and view the group’s wacky, artsy special for three new tracks and cameos from everyone from Bono to Michael Cera to Aziz Ansari.

Later in the weekend, the band tweeted links to a zip file containing all four live tracks, so feel free to take these pulsing tracks on the go.

Arcade fire’s Reflektor doesn’t come out until October 28th, but who knows what other surprises the band has in store for us in the meantime.