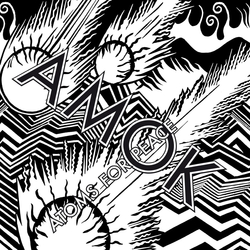 There’s something in the way Thom Yorke releases his work outside of Radiohead that lends itself to more modest expectations. His 2006 solo record The Eraser was a solid record but it didn’t carry near the same weight — and certainly wasn’t released with the same amount of fanfare — as a typical Radiohead album. The release of AMOK, the debut from Yorke’s Atoms for Peace — which also features Flea, Nigel Godrich, Joey Waronker and Mauro Refosco — is reminiscent of The Eraser in that respect. This seems fairly appropriate considering, even with the additional personnel involved in this record, it feels very much like a sequel to Yorke’s solo record musically speaking. Given that this is essentially the touring band for that album and the band’s name is derived from the Yorke track with the same name, what else should we expect?

If there was one area that was continually sited as the greatest shortcoming of The Eraser in contrast to your standard Radiohead album, it was the comparative lack of dynamic range. There was never any doubt that each of Radiohead’s five members held a significant position in terms of crafting the distinct sounds that come from the band, but The Eraser went a long way to highlight just how definitely the band is more than the sum of its parts. Even still, if the record initially felt like a bit of a stopgap between Radiohead releases, Yorke has been content to carve out a relatively modest solo career that has taken on a life of its own. Thom Yorke, as he stands as a solo artist, now carries with him some very distinct connotations.

As a result, “Default” — our first taste of the record— likely surprised very few people, confirming that AMOK would comprise the same skittering beats and overall glitchiness that we’ve come to expect from Yorke’s solo material. Nearly ditching acoustic instrumentation altogether, AMOK is committed to electronic music in a way that even The Eraser wasn’t. Or so it would seem, anyway. In interviews Thom has stated that the band wanted a record where “you weren’t quite sure where the human starts and the machine ends” and at that they have certainly succeeded. There are bits of guitar and piano peppering these tracks and many of the beats were played live, but the vast majority of the album is almost clinical in its robotic nature. This all contrasts wonderfully, of course, with Yorke’s magnificent wail.

Much of AMOK is strikingly spare, composed of little more than Thom’s voice, some erratic beats and a little synth. On the whole, it maintains a consistent icy tone. There’s an effective dub-like tendency throughout where the use of delay on rhythms at opportune moments adds both ambience and impact. “Dropped” is as intense and immediate as the album gets and in a sense, the song threatens to dwarf the remainder of the album. Flea’s propulsive bass plays off of the kitchen sink rhythms; there’s a gorgeous arpeggio breakdown after which the song is propelled heavenward. “Judge, Jury and Executioner” and “Amok,” with their gorgeous layered harmonies, are also easily standouts. Although these and the other album highlights tend to overshadow the lesser tracks, AMOK was designed to be digested as a whole piece and these songs still make the most sense in the context of the record.

On AMOK, Atoms for Peace for the most part never really strive for uncharted frontiers; the band set out to accomplish very clear and concise goals and they reach them with relative ease. There are certainly no grand gestures and the end result is an album with very subtle pleasures. For the most part, it’s the smallest details that really carry the most weight.  Much like The King of Limbs, the album benefits heavily from headphones as many of those small details tend to get lost in the open air. The texture of the synths, the rolling noise that creeps in the middle of “Before Your Very Eyes…”, the way treated vocal samples appear and fade into the ether; all of these details are barely detectable with casual listening but ultimately make up the most rewarding aspects of the record. It may not be of the same caliber as a typical release from Thom’s main gig, but there’s still plenty to love.