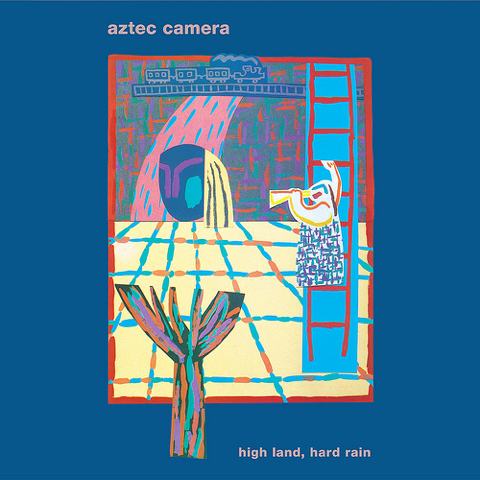 Debut albums rarely arrive with the kind of pristine aesthetic and sophistication of Aztec Camera’s High Land, Hard Rain. The first proper full-length outing from Scottish singer/songwriter Roddy Frame, the 1983 album isn’t always mentioned in the same sentence as similar classics from the same era, such as The Smiths’ similarly jangly 1984 debut, or Elvis Costello and The Attractions’ rich and soulful Imperial Bedroom, but the talent on display is by all means close to par with those heavyweights. Of course, when you take into consideration that Frame was 18 at the time it was written, High Land, Hard Rain seems like an even more outstanding accomplishment.

Released on the late-end of a Glasgow Postcard Records post-punk renaissance that included aesthetically similar if slightly more abrasive bands like Josef K and Orange Juice, High Land, Hard Rain wasn’t entirely peerless when it arrived, though few bands actually sounded much like Aztec Camera. Frame wasn’t much interested in adopting the synth-heavy new wave sounds that were so prevalent at the time, nor were big, dumb power chords his thing — although his cover of Van Halen’s “Jump” at least proved that both could be adapted to his own playing style. Rather, the sound of the record leans heavily on crisp, clean guitar riffs, acoustic strums and flourishes of classical guitar, all in competition with his own charmingly witty lyrics. And “Oblivious,” one of the most enduring singles from the album, even ascends into a climactic flamenco-style guitar solo — not exactly par for the course in the early days of MTV.

On paper, High Land, Hard Rain seems downright weird, particularly for 1983. You don’t very well smush pop, soul, jazz, folk, R&B and flamenco under one ostensibly “rock” canopy without expecting things to get a little messy, but Frame’s uncanny knack for melody keeps it from ever close to going awry. “Lost Outside the Tunnel” manages to effortlessly bridge a lounge-inspired verse with a powerful, climactic chorus. Frame gently eases into a jazz guitar approach on the laid-back “Release,” which still displays a youthful angst in spite of its gentle nature: “Release/ ‘Cause I wanted the world/ But all I could get to was a gun or a girl.” And standout “Pillar to Post” feels like the natural transition between The Jam and The Style Council (sans Paul Weller, natch).

Now 31 years old, High Land, Hard Rain feels remarkably contemporary — more so than the albums that the band released afterward. And it probably helps that fellow Glaswegians like Belle and Sebastian and Camera Obscura, as well as groups like Phoenix, have carried on its legacy in their own subtle ways. Domino Records has marked the anniversary by offering a beefed up Aztec Camera High Land, Hard Rain deluxe reissue with a bonus disc of rarities, whose contents span from b-sides and outtakes to BBC sessions and remixes. And, as is generally the case, the bonus material will probably be of greater value to those who have already spent some quality time with Aztec Camera, though there’s plenty of interesting nuggets here — the rockabilly-style “Queen’s Tattoo,” the stripped-down and emotional “Haywire,” or the effects-heavy “Set the Killing Free.” And while the pair of remixes of “Oblivious” show, more than anything, how peculiar a fit the band is for a club-friendly chop job, they’re certainly interesting to hear in context. Though the extended, synth-heavy edit of “Walk Out to Winter” works surprisingly well.

Roddy Frame didn’t stay comfortably in one place after he released his debut, and Aztec Camera underwent a significant amount of change in the years that followed. With Frame the sole permanent member of the band, a revolving cast of musicians made up its roster over the next 12 years, including Orange Juice’s Malcolm Ross and a brief member of The Smiths, Craig Gannon. To hear how far Aztec Camera would divert from this early peak, check the band’s 1988 hit “Somewhere In My Heart,” which has drum-machine beats, saxophone, synthesizer and a hammy electric guitar solo. And it’s a credit to Frame’s own songwriting ability that it’s mostly saved from the kind of poor-taste overproduction that plagued pretty much everything that was released the same year. Of course, it doesn’t sound like the same band. And it wasn’t. Times change and people grow up, but High Land, Hard Rain remains timeless.