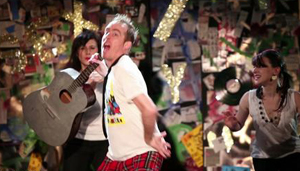 Ever since the Internet became the primary medium through which music videos have been viewed, artists have been breaking more barriers with what they can do with the art form, from ignoring decency standards to making interactive experiences. Some of the best videos this year, however, are merely great short films, some animated, some live action, some funny, some touching and all taking new approaches to the meeting point between music and film.

The YouTube title on the video may say ‘NSFW’ but there’s no nudity involved here, save for a topless male for a second or two. However, the video is a not so subtle nod to the ‘banned’ Calvin Klein ads of yesteryear that resembled homemade pornography, hence the joke. Directed by Alex Markman.

Sleater-Kinney’s Carrie Brownstein wakes up to a song that doesn’t stop when she hits the “snooze” button, which leads to a frustrating series of broken household items and a surprise cameo at the end. Much hilarity, directed by Whitey McConnaughy.

LCD Soundsystem get roughed up by a gang of mean-spirited panda people. It’s awesome.

This clip initially seems like a standard hip-hop video: fly gear, Crown Royal, and some fine looking ladies. But things get weird really quickly: Tron-like neon dancers, puppet backing band, and a head that turns into a flipbook.

What initially seems like a silly boy band parody goes way more ridiculous when the bald, lightning-mouthed figure shows up and then everyone is destroyed by a floating head. Yep.

Spike Jonze directed this intense video, which is part of a slightly longer short film, following teenagers through a military occupied suburb.

While a lot of our favorite videos from this year have been humorous, this clip takes a turn for the heartbreaking, with a touching dual narrative between a cosmonaut and his wife. Directed by Scott Coffey.

This animated clip for FlyLo’s space age jam is a mind-blowing and disturbingly hilarious robot murder rampage. And their victims seem to be enjoying it! Directed by Beeple.

2. Vampire Weekend – “Giving Up the Gun”

The RZA referees a series of tennis matches between a girl and various competitors, including Jake Gyllenhaal and Joe Jonas, to increasingly ridiculous effect. Directed by the Malloys.

1. Ted Leo and the Pharmacists – “Bottled In Cork”

Ted Leo and the Pharmacists turn The Brutalist Bricks into an “American Idiot” style musical with the help of Paul F. Tompkins. The hilarious and epic video also guest stars John Hodgman, and Titus Andronicus’ Patrick Stickles, who is moved to tears by the power of punk rock.