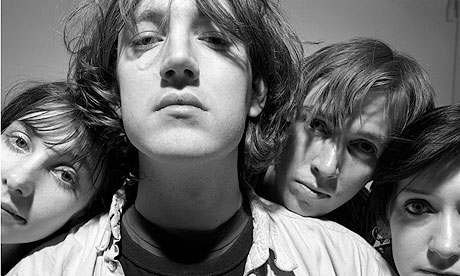 On this week’s edition of Best Song Ever: Seven of the best songs ever! What did you expect? For your reading enjoyment, we have a shoegazer classic, a recent feature film show-stealer, a guitar song for anti-guitarists, a formerly hated song turned favorite, a crowning achievement in lyricism, a musical short story and a song to soundtrack your hibernation. Store up the honey pots, these songs should last you for a while.

Guitar is overrated. There is way too much guitar in popular music, and quite frankly, there doesn’t need to be. For every squealing solo, every palm mute, every pick harmonic, every feedback screech, somewhere, a piano dies. But then again, there are guitarists like J. Robbins who make the instrument interesting again. On “Crowned,” a hyperactive jaunt from Burning Airlines’ 1999 debut, Mission: Control!, Robbins winds his twisting-turning screwy riffs around Bill Barbot’s slippery bass groove. Coupled with the shouted “Crowned in the candy coronation,” the guitars make for a peculiar, but enjoyable nest. And after a little while, the song even becomes (gasp) catchy. And there’s not one solo to be heard! — Jeff Terich

“What You Want”
by My Bloody Valentine
from Loveless

There are some rare songs you feel should never end. Those are the songs that make you feel like you’re dissolving into them, which resonate so deep that every trill or hum or flutter of sound is suddenly in your breath, your blinks and beating heart. That’s how I feel about My Bloody Valentine’s “What You Want,” one of those songs that actually sounds like the album cover looks. When I hear “What You Want,” I feel like I’m being washed away, like it’s engulfing me in a warm fog lit by magenta laser light. As with other songs on Loveless, it’s difficult to make out what Kevin Shields and Bilinda Butcher are singing, but it doesn’t matter. In those melodic hums I feel like everything’s going to be okay, like I’m floating to someplace lovely and maybe, just maybe, I’ll get there and music will never stop. — Hubert Vigilla

“Styrofoam Plates”
By Death Cab for Cutie
From The Photo Album

Everyone who really knows me knows that I love a good build-up song. Gibbard’s story of a tirade against a dead useless excuse for a father, although fictional, seems palpable. It’s after the bridge when we hear Gibbard really spit nails for the first time, at the end completely overwhelmed by anger and emotion. Although I can’t necessarily identify with the song, that doesn’t mean I can’t appreciate it for what it is. After all, it didn’t necessarily happen to Ben either. Plus, as an English major, I really love the rhyme in “I’ll stand up and scream if the morning remain quiet, you can deck out a lie in a suit, I won’t buy it.” Throw on top of that the biblical reference in the last line, “he was a bastard in life thus a bastard in death,” and you have one powerful song. — Terrance Terich

“A Boy Like Me”
by Patrick Wolf
from Lycanthropy

Everyone who knows me is probably sick of hearing how much I love this record, but I think we’re all entitled to a liberal degree of frothing at the mouth when it comes to music, so I’m not going to stop. While there are a handful of songs on Lycanthropy that make me rabid, this one encapsulates the quality of the album I love the most.

There are certain records that are perfect for hibernation—you know the ones I’m talking about. They’re sitting at your bedside on those days when all you really want to do is curl into a ball in a dark corner and hide away for a while. You can’t hide forever, though, and these albums take you someplace quiet, mentally clean you up, then send you off into the zoo outside. If you own If You’re Feeling Sinister or anything by The Smiths, you can probably relate. Almost all of Patrick Wolf’s lyrics serve that purpose perfectly—and many do it much better than those for “A Boy Like Me.” But it’s the wild, frenetic energy captured in pulsing beats and the chorus of “na na na”s that make this song meaningful enough to chase off dark clouds, and catchy enough to pick you up and throw you out the door as well. — Andrew Good

“Dead”
by The Pixies
from Doolittle

The first time I heard this song, I absolutely hated it. My brother let a tape recorder run after recording “Here Comes Your Man” onto a mix for me, resulting in the following track making its way onto the mix. Just a youngster without the appreciation for its abrasiveness that I do now, it took me a few years, but I eventually did learn to like it, and what’s more, it’s actually one of my favorite songs by The Pixies. Picking a favorite from Doolittle is pretty much impossible, but this song is probably in the top five anyway. One of the ugliest and yet coolest songs in existence, it took the idea of a pop song and beat it over the head, splitting the song between chugging dissonant verses, screeching choruses and a surf rock bridge. It’s almost as if parts of different parts of other songs were smooshed together, but the transitions are so perfect that it could have only been written that way. — JT

“New Slang”
by The Shins
from Oh, Inverted Word

Zach Braff stole my idea… kind of. You see, when I eventually got some money together and decided to go for broke and make a movie, I was going to have a scene where two people (a pair of would-be lovers in high school) meet for the first time in years, converse and become totally smitten to the song “New Slang.” There’s something melancholic and touching about this Shins tune with its desolate strums, the haunting voices that usher it in, James Mercer’s lonesome vocals, the quivering guitar or that lone tambourine. The lyrics are crafted so beautifully, the similes – “Dawn breaks like a bull through the hall,” “If you took to me like / A gull takes to the wind,” “I’d a danced like the king of the eyesores” – the images, that palpable sense of regret are all so overpowering that if you aren’t misty midway through the second chorus you’re at the very least wearing a wry smile trying to hold back the flood. But the cinematic idea would now seem derivative and, like the gist of the song, the cinematic possibilities amount to a sigh and a heartbroken could’ve been. And it’s all Zach Braff’s fault. — HV

Almost every song on Little Earthquakes can be set aside as a `best song ever,’ but this one in particular can blow the doors off of almost anything else in terms of raw emotion, language and imagery. Whether it’s about being used, rejected or raped (or all of the above) Amos spits fire in every verse, and plays the piano as if she’s going to forget how and must rage against it. Tour drummer Matt Chamberlain cites the song as his favorite to play live as he gets to pound the hell out of the skins. You want to talk about letting out bottled up feelings? This is the anthem. Two lines stand out as holding lyrics for the ages, one about the boys who wronged her, “I wanna smash the faces of those beautiful boys, those Christian boys, so you can make me cum that doesn’t make you Jesus.” The other about the girls, “Those demigods with their nine-inch nails and little fascist panties tucked inside the heart of every nice girl.” This song cements my ideas about relationships and religion, namely, hate the player AND the game. — TT