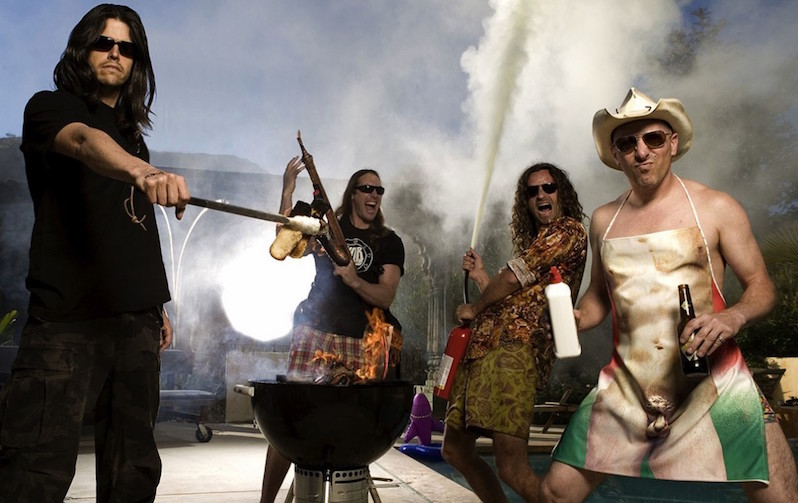 In our 16-plus years of existence, Treble has somehow never written a dedicated critique in response to the music of Tool. At first this discovery seems puzzling: We gleefully embrace metal, and when it comes to the beloved Los Angeles quartet we’ve certainly reported plenty of news about them, placed their work in context through features and countdowns, and reviewed band members’ other projects. But prog-metal cognoscenti have celebrated the lore and legend of Tool music more so than actual Tool music since the dust settled on 2006’s 10,000 Days. With just that album on our timeline, a lack of Tool commentary unfortunately makes sense.

At last, fresh meat is coming with a 2019 LP and a legitimate tour behind it. So how are new fans brought into the fold, and discussions of Tool’s legacy framed? Try surprising listeners both casual and committed with the breadth of the band’s success throughout their career. Every Tool LP has approached or surpassed double-platinum status in the US and birthed at least two singles, all cracking the top 40 on subsidiary Billboard charts; “Schism,” from Lateralus in 2001, even landed on the proper Top 100. That’s a Grammy-winning, MTV-flaring, radio-bursting set of tracks to drag people in and down into the rest of the band’s catalog like so much quicksand.

We’ve organized those here based on common keys, intros or outros, themes, and delivery, and tried to split the difference between bigger and lesser hits across 76 minutes of music—enough for a jam-packed CD, a trendy cassette, or three slabs o’wax as shown below. Until and unless Tool port their music over to streaming services like Spotify, our playlist of YouTube links will have to do for now. Let’s see how many third eyes get pried open (and existing physical product gets purchased) after this survey of Tool’s greatest hits.

While the band are known for atmospheric openings of songs and albums, our proposed LP drops listeners into the maelstrom with little warning. We start with the second half of a suite from Lateralus, as stadium-filling guitars propel creepy-cum-mystical lyrics about awakening and transformation. Its sludgy end merges nicely with the hammered strings that then herald one of Tool’s most beloved singles, blossoming into a passionate defense of friendship with a title no DJ ever dared speak.

Vocalist Maynard James Keenan is a big reason why Tool’s music comes across as relentlessly angry regardless of actual theme. This trio of singles from the first half of the band’s discography match that anger with blunt instrumental force. From the anti-censorship hardcore punk of Opiate single “Hush” to the later harrowing imagery of Keenan’s own grooming for abuse and Bill Hicks’ recipe for California catastrophe, these are some of the few and best songs in Tool’s repertoire that don’t require a bibliography.

Singles played in similar keys help us reach the halfway point of our theoretical album. We match up the long, ur-prog workout of a last single from 10,000 Days with the Undertow song that really introduced Tool (and their signature music video style) to the world. This binary universe contains all you need to know about the range of guitarist Adam Jones, able to nail radio-ready alt-rock to the wall as well as hop between 9/8 and 6/4 time to fucking shred.

The back half of Tool’s greatest hits focuses on the back half of their catalog so far, starting with another pair of songs that match up well to our ears. Both tackle the dilemma of hearing the opinions and advice of other people, and both feature Justin Chancellor’s beautiful bass gymnastics. The arrangements and Keenan’s vocals make each song succeed in different ways: “H.” rumbles up from the bottom, while “The Pot”—the only Tool song to top any US Billboard chart—screams in from overhead like a fighter jet.

Pulling from such a limited set of music, there was a chance that songs from the same Tool album would bump into each other. So, Lateralus fans, we’re sorry and you’re welcome. “Schism” is filled with Chancellor’s famed staccato bassline and Keenan’s manipulations of melody (“Communicatiooooooonnnn”) and growl (“I know the pieces fit”). “Lateralus,” meanwhile, is legendary in its literal math-rock composition, as the band used the Golden Ratio and the Fibonacci sequence to guide creative decisions for it.

Drummer Danny Carey hasn’t been mentioned yet, but he sustains the band’s momentum across their catalog. He winds like a serpent around “Vicarious,” the malevolent and complex first release from 10,000 Days that ended up charting wider around the world than any other Tool song. A signature song from Ænima then circles back to themes of consciousness and metamorphosis addressed in track 1, “Parabola,” as Carey’s bruising strikes behind the last half-minute of riffing produce one of mainstream metal’s most intense finales. “Forty Six & 2” may be the midpoint of Tool’s 13-single history, but it fits perfectly at the end of this tracklist.