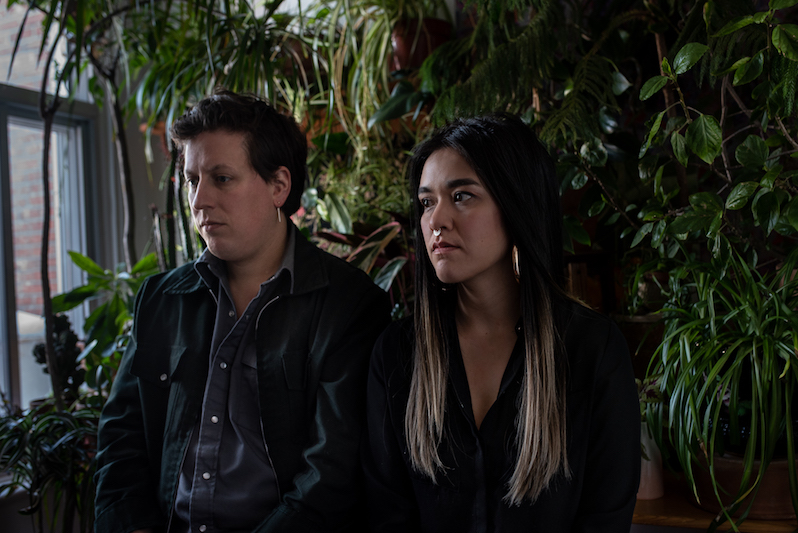 Robin Wattie doesn’t bring up any metal bands in our conversation. She doesn’t talk about any rock bands either, for that matter. In a chat that spans the better part of an hour, the vocalist and guitarist of Montreal-based band Big|Brave talks about minimalist and avant garde composers like Steve Reich and John Cage. She waxes enthusiastic about classic country singers such as Dolly Parton and Loretta Lynn, and she says she regularly listens to Alice Coltrane. That’s a subtle tell to listeners about just what kind of heavy, noisy rock band Big|Brave is, ambiguous as those terms might be. On paper it might sound academic or intellectual in nature, but the music itself is massive. It’s not based around riffs or double-bass pedal rhythms. It’s powerful, yet often meditative. It’s always evolving, but it never strays from its central motif.

Big|Brave, it seems, isn’t an easy band to understand. Not at first anyway.

“Au De La, that was sort of our coming out album,” Wattie says of the band’s 2015 album, their first released by contemporary metal and hardcore outpost Southern Lord. “So that’s when we got to sort of land on people’s radar. And that’s when they would ask, ‘what kind of music is this?’ Or they’d describe it as—some would say post-rock, and we’re not really that, and some would say metal, and we’re not really metal either.”

Big|Brave might not seem as if they’re committed to one style, or that they seek to upset the boundaries and categories of how certain types of music is perceived. And that’s perhaps true. But viewed another way, Big|Brave are very committed to a sound, just one highly specific to this very band. On their 2017 album Ardor, Wattie, Mathieu Ball and drummer Louis-Alexandre Beauregard stretched three tracks to a total of 40 minutes of titanic drone-based compositions, finding beauty and grace within the harrowing and sometimes dissonant, abrasive space of doom and sludge. It felt a lot like a metal albums in many ways, if only because the sheer impact of it felt like a 100-foot crane freefalling into a busy street.

A Gaze Among Them, the band’s fourth album, covers a similarly ambiguous stylistic terrain, but with a different approach. The heaviness remains, but there’s a more accessible melodic sensibility in a song such as “Muted Shifting of Space,” and an infectious kind of pulse in first single “Sibling.” When creating these songs, Wattie, Ball and drummer Loel Campbell took a step back to the original intent of how Big|Brave was conceived, and used that as a means of determining how to move forward.

“The question we posed to ourselves is ‘how do we make something interesting enough for the duration of a song that is one chord?’, basically,” she says. “Our original concepts were having to do with tension, space, minimalism, using the gear that we had, which still to this day isn’t very much. I think where we sit, no matter what we do, we can go in almost any direction because our sound is not very specific.

“If you just keep listening to one chord for—some of our songs are 10 minutes—without some kind of evolution like something Tony Conrad would do, it can be meditative but it can also be redundant,” she adds. “So it’s heavily focused on something that’s fundamentally interesting enough for us, if we can get behind it. And with melody, since I’m not a trained singer and I don’t know much about musical theory, finding a melody for one note for seven minutes can be pretty challenging.”

In previous interviews, Wattie has mentioned that understanding the literal meaning of her lyrics, or even the language itself, isn’t crucial to understanding the emotion behind it. That’s changed with Gaze, a record in which Wattie more closely magnifies the experience of navigating the world as a woman or non-male—the “gaze” in the title could refer to the male gaze, she says, and the songs tie more explicitly back to ideas of gender and power dynamics. “Muted Shifting of Space” finds her exploring spaces as occupied through a gendered lens (“I insert my body into these spaces“), and on “Holding Pattern,” she takes a critical view of allyship as something to be worn as a badge (“You take up their air…you make this about you“).

It’s not so much that A Gaze Among Them is a political album, though it could definitely be perceived as such. But Wattie addresses a more direct personal experience that was too important to leave veiled in metaphor.

“I’ve been mugged at gunpoint, I’ve had stalkers,” she says. “It’s just sort of like a nod to what it means to not be a man, and being the object of a man’s desire or interest. I work at a bar, and that’s a different dynamic than working table service. I’ve been working in the service industry for 18 years. When you’re behind the bar, you’re kind of on display, and people come to you for their liquor and beer, so the power dynamic is kind of shifted. People are getting drunk, you’re subject to different types of harassment, and I’ve gotten it all. And being ethnically ambiguous too? It’s a whole bunch of shit.”

However one hears Big|Brave, that experience essentially pales to how the music is felt. Both in a physical way, and in an emotional one. It’s an unstoppable force—a towering juggernaut of a sonic presence. It might feel like metal, or it might feel like something else. But most importantly it’s a means for exploring something internal and creating a healthy, cathartic outlet for it. Which, for Wattie, is one of the best parts of what they do.

“I’m not an angry person by nature, and I don’t usually express anger easily,” she says. “So this, being able to yell into a microphone with a shit ton of sound backing me up, feels really good.”