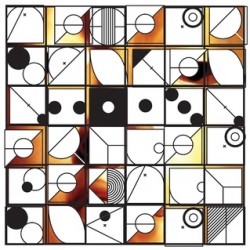 Arone Dyer and Aron Sanchez, better known as Buke and Gase, have a reputation based on a puckish, albeit utilitarian ingenuity. Their name — since changed from the prone-to-mispronunciation Buke and Gass — refers to their chosen method of homemade instrumentation: Dyer, who also builds bicycles, plays a bass ukulele, or “buke,” one version of which is a Frankenstein’s monster incorporating Volvo parts, while Sanchez rocks the “gase,” essentially a lower-pitched electric guitar. And aside from some basic, foot-mounted cymbals, snares or kick drums, that’s basically it. This innovative economy drives the band’s sound, which is surprisingly powerful, abrasive, even aggressive — not that you’d be able to convince anyone who scoffs at the idea of a ukulele-wielding duo playing Fugazi covers. If “cuteness” is what you seek, however, Buke and Gase have a much more menacing retort for you.

General Dome, the band’s second album, retains the thrilling melodic sensibility of their 2010 debut, Riposte, but with an even more pronounced and palpable intensity. It’s a punk or post-hardcore album masquerading as a pop record, sweetness undercut with melodic violence, similar to that of St. Vincent’s Annie Clark, who shared a bill with the band at Our Concert Could Be Your Life. Last month the band played at the All Tomorrow’s Parties festival curated by onetime bandmates The National; but perhaps more fittingly, if unexpectedly, just a short couple weeks prior, they were joined by Bob Weston onstage at the Shellac-curated ATP. Sure, they’re a sophisticated, brainy pop group, but they’ll cut you.

Jagged edges crop up throughout the duration of General Dome, Dyer and Sanchez wrenching some gnarly, but melodically stunning sounds from their homespun implements, made all the jerkier via a range of slightly-off time signatures in tracks like “Hiccup” and “In the Company of Fish.” In the former, the duo stomps like a post-modern Bolan, Dyer punctuating their slashes of strings with a cry of “Aha! Got you down again.” Yet in the latter, they reach Sonic Youth levels of hypnotic, melodic dissonance, Dyer’s gorgeously agile voice chirping nimbly amid the chaos. And at their most ambitious, the two stack riffs higher and higher, building soaring skyscrapers of fretwork on “Split Like a Lip, No Blood on the Beard.”

Just as often as Dyer and Sanchez’s songs sound primed for a bruising, so do Dyer’s lyrics, which are more rife with danger than ever. The title track, above all, is a repository for disturbing imagery, with Dyer sing-speaking, “I carry a chest weight, chest sense with general doom/ I awoke to find this as my vital state,” later to declare, “I’m not the last pawn with a gun” and “I’m not a force to be decreed.” Her vocals never lose the charm or allure that’s present in the group’s more serene, moments, but she still sounds like a woman not to be fucked with. And that only intensifies deeper into the album, with “Twisting the Lasso of Truth” cycling around the hook, “Fight/ God damn it, stand up and fight!” Elsewhere, introspection approximates a crime scene on “Hard Times,” where Dyer recounts “Digging beneath my fingernails and finding dirty evidence.”

Buke and Gase take the listener on something of a rough ride on General Dome, though it’s more adrenaline rush than title bout. There are any number of queasy or abrasive ideas going on in any one song, but they’re always going somewhere interesting, engineered to hit covert pleasure zones and release endorphins. But deep within each exclamation-addled track is an experience much deeper and richer, harboring a density and melodic sensibility that a cursory listen only grazes. If necessity is the mother of invention, then Buke and Gase suggest innovation’s mum may well be the willingness to break everything apart.

Buke and Gase’s “Hiccup” video is a dizzy ride