Fiercely independent, D.I.Y., inventive, resourceful — these are just a few of the phrases that accurately summarize the Brooklyn duo of Arone Dyer and Aron Sanchez, better known as Buke and Gase. Their story is one that gains a lot of traction simply because of how novel it is, the two musicians having spent half a decade performing with homemade instruments, Dyer on bass ukulele (buke) and Sanchez on a hybridized guitar-bass (gase). They don’t employ the use of a drummer, instead relying on foot-mounted cymbals and drums, and with these limited means, crafting a sound much broader than a two-person busking set-up might generally allow.

After releasing debut album Riposte in 2010, Dyer and Sanchez took to modifying their sound a bit, tweaking their instruments and reinforcing them with steelier material in order to wrench a mightier sound. The resulting muscle can be heard on new album General Dome, a stunning collection of progressive post-punk far more massive than the sum of its Frankenstein’s monster parts. On hard rocking stompers like “Hiccup,” their streamlined, yet abrasive sonic augmentation shines through, the sound not unlike a slightly more pop-friendly take on early ‘90s post-hardcore. Yet Dyer’s own voice is a remarkable instrument unto itself, reaching stunning highs on standout tracks like “In the Company of Fish.”

In the middle of the band’s North American tour in support of General Dome, Sanchez spoke with Treble about the new album, finding the right sound and what comes next.

Treble: What pushed you in the direction of the sound of General Dome.

Aron Sanchez: It kind of started to unveil itself throughout the process. We kind of go in without too many specific ideas. It’s a discovery process. The music leads us — we just let it happen. We had talked about being a little more concise, and to have more focus. Less jumping around. We were just trying to stay in a groove

Treble: It seems more abrasive, even darker than the last album, Riposte. Was this intentional?

AS: Mmm… not necessarily. It kind of unveiled itself while we were working on it. It was seeming kind of dark – there was a more serious vibe. I don’t know what it has to do with, maybe something we were listening to at the time. Mostly we were just being more mindful of the arrangements.

Treble: What were you listening to while you were recording?

AS: I can’t quite remember. Extra Life. Maybe Depeche Mode?

Treble: I understand that much of your songwriting comes out of improvisation – do you each come to the table with ideas, or do you leave a blank slate until you’re actually writing together?

AS: For our process, we don’t write anything until we’re in the same room together. Just the two of us together, going at it for a few hours at a time. We record ourselves while we’re playing the whole time, and we listen back and pull out the parts we like. Rarely do we go in with any specific ideas.

Fleshing out a song is a laborious process. We listen back and then map out what we’re going to do. It takes a while. But we do it together in the same room, and just hash it out.  We record as many parts live as we can.

Treble: With so many recordings of old sessions, do you ever go back and pull out ideas from those recordings?

AS: Yeah, we have a database of all these parts from the last four years. We’ll go back and be reminded of something we liked. Sometimes we’ll pull something out. I can think of a few ideas right now from old recordings that I’d like to do something with.

Treble: The artwork for General Dome contains a typographic code printed on it – where did this idea come from?

AS: We were trying to figure out what to do for artwork and Arone had recently visited the Dia: Beacon Museum, and there was a Sol LeWitt exhibition, and she got inspired by some of the imagery and the graphical way it works. So we decided to make an alphabet of symbols, and that would just be the artwork for the album. And we would use it in different places, like on posters and t-shirts. 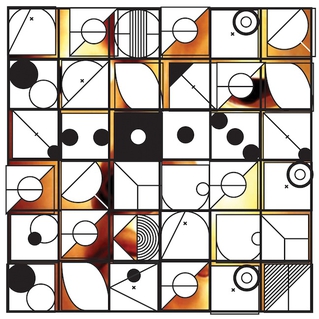 Treble: You each made some modifications to your instruments recently –was this out of necessity, or a desire to improve on them?

AS: We were definitely looking to improve, trying to refine the tone of our instruments. It’s weird when you’re making your own instruments, because you’re in a constant battle to get the sound right. You make one iteration and think, “this is cool, but I wish it was more like this.” But the process of modifying it is healthy for just getting it to perform better.

Treble: Given that your performances are built on a self-imposed set of limitations, do you maintain the same kind of limitations on yourselves while recording as you might in a live setting?

AS: No — we have since moved on from our old process a bit. On the Function Falls EP, which was actually recorded after General Dome, we started experimenting with a new process. We’ve been using a computer more. Going forward, we’re planning on being less restrictive with our process. We’ve reached the limits of our limitations.

Treble: Are you any more open to outside collaboration now than you were before?

AS: I wouldn’t say we’re more open, but we think about it. It’s kind of an economic decision more than anything. But we do enjoy having control over the process.