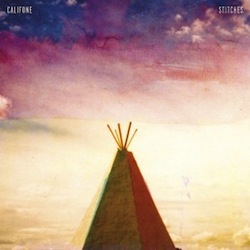 Seldom does Califone release an album that feels like a total artistic realignment. From their arrival out of the ashes of indie rockers Red Red Meat, the Chicago-based alt-country/post-rock group has been more or less permanently situated in left field. Nothing they do ever feels conventional, and yet everything the band does is always very much Califone. The tight snap of a steel guitar string, the clatter and shuffle of junkyard percussion, the smoky wheeze of singer Tim Rutili — when you hear a Califone album, you know you’re listening to a Califone album. A sound that singular and distinctive leaves an indelible imprint.

The muted, acoustic plucks of Stiches opening track “Movie Music Kills a Kiss” confirms that the band’s sonic makeup has suffered essentially no shakeup or disturbance since 2009’s All My Friends Are Funeral Singers. The Califone of today bears a dead-on resemblance to the Califone of yesteryear — twanged-up, fuzzy, rustic and dreamy, with more than a touch of disorienting psychedelia. And there’s no reason to find any fault with that, really. The band has always been sufficiently weird on their own, to the degree that attempting to push their mutant-country even further past the precipice of accessibility would run the risk of losing part of that strange, atmospheric beauty that made their music so appealing in the first place. Certainly, they’ve pushed weird to an extreme — the back-and-forth volleys of space-folk and space-funk on 2004’s Heron King Blues marked peak oddball for the band, and with successful results at that. But since then, Califone have subtly shifted their focus, without giving any indication of altering their sound, per se.

Stitches, the band’s sixth proper album, finds Califone setting their crosshairs on melody much more frequently than atmosphere. In the past, there’s been a much stronger balance, with a heavy dose of experimental treatments on even their catchiest tunes, like “Your Golden Ass” on 2003’s Quicksand/Cradlesnakes, or “3 Legged Animals” from 2006’s Roots and Crowns. Yet on Stitches, the group doesn’t seem all that concerned about the relative lack of scuff on their songs. With fuzzier rockers like “Frosted Tips” and pretty, soulful ballads like “Magdalene,” they’re veering much closer to conventionality than before, though on some level, the distance they’ve kept has always been something of an illusion. Beneath that network of effects and studio treatments, there have always been some great hooks, even if occasionally obscured.

On Stitches, the band’s intricate textures and melodies are given the proper amount of light and oxygen to breathe and flourish. The awkwardly titled “moonbath.brainsalt.a.holy.fool” is an excellent showcase for Califone’s abilities, with a smoky, jazz-influenced opening groove that opens up to a wonderful juxtaposition of piano and guitar that sounds rich and organic, tailor-fit for a Sunday afternoon headphones-and-vinyl experience. With the hypnotic krautrock pulse and feedback-driven jitter-gaze of “A Thin Skin of Bullfight Dust,” however, Califone remind the listener that they’re still some distance from normal, however one chooses to define that. Califone’s progression has brought them closer to approachability on Stitches, as far as an outsider might be concerned; it just happens to be a stop along the same wonderfully twisted trail they’ve been on for 15 years.