Bonnaroo has just announced its lineup for 2014 and it’s got some big names at the top, middle and everywhere, pretty much. Topping this year’s Bonnaroo lineup are Elton John and Kanye West — two artists that know how to put on a show. But they’ve got plenty of good company: Vampire Weekend, Phoenix, Arctic Monkeys, Frank Ocean, Nick Cave and the Bad Seeds, Damon Albarn, Ms. Lauryn Hill, Disclosure, Cut Copy, Neutral Milk Hotel, Broken Bells, James Blake, Ice Cube, Janelle Monáe, Chvrches, Andrew Bird, Mastodon, Little Dragon, Phosphorescent, Danny Brown, Warpaint, Darkside, Pusha T, Goat, and Lionel MF’n Richie are all playing the festival in addition to a whole mess of others, including but not limited to a Superjam led by Skrillex.

Check out the full lineup via the poster below. Bonnaroo goes down June 12-15 in Manchester, Tennessee. 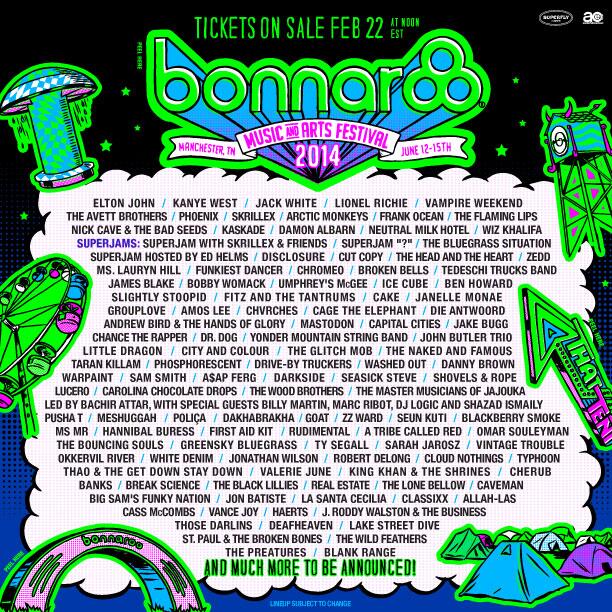