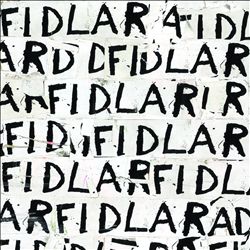 On FIDLAR‘s website, the band’s rolling news updates are headed by the phrase, “Fuck it dog life’s a risk.” On their eponymous debut, FIDLAR makes sure you know that they’re taking all the risks. Because, well, fuck it.

Menacing, rolling guitars set off the album as Zac Carper, lead singer and guitarist eventually gets on a roll, “40 beers later and a line of speed / 8 ball blown and a half a pound of weed.” This assault escalates through an anthemic chorus of “I / drink / cheap / beer / so / what / fuck / you.” Each word is shouted and stands on its own for emphasis.

There’s no tact, no control, and nothing much to say for technique and songwriting, except to say that they possess the charisma and talent necessary to pull off exactly what they’re going for. So when they scream, “There’s nothing wrong with living like this / all my friends are pieces of shit,” after detailing another lewd and belligerent afternoon on “Stoked and Broke,” you’re disarmed. There’s nothing in fighting their determined fuck-it attitude. All you can do is laugh and go with it. Especially since the guitars aren’t always menacing — sometimes they’re charmingly aggressive. On “LDA,” the group’s California roots come out in a sun-bleached romp along the beach; the group has the patience for building up suspense too, as the guitars glimmer right before power chords take over for each chorus on “Wake Bake Skate”; and on “Gimme Something,” where an early Wilco comparison may be hidden somewhere, with its steady groove and country guitar, the charm is deftly undercut by the fact that their probably only putting on a nice face since they’re asking for favors.

Yet, I shouldn’t sell their abilities to have human emotions completely short. On “Max Can’t Surf,” they decry Max’s inability to surf while stoned and possessing a bad sense of balance, and then Carper laments, “I smoke weed if my baby lets me / or I won’t get laid / or I won’t get laid…” Critical thinking! Cause and effect! They also show signs of sorrow on “Whore,” singing on the chorus, “Why did you go betray me? / You’re such a whore / I stay at home drinking / You’re such a whore.” Even though he may be answering his own question in between the name-calling, the bitterness seems to mean that at some point there must have been some feelings with depth, right?

But that’s too much thought; hedonism should be overriding that at this point. Ultimately, instead of dirty but dapper post-punk or an immature high-school defensiveness, FIDLAR’s answer is to disregard thought, effort, even apathy. These are young adults abusing everything they stumble upon and they’re going to shout about it over loud guitars until you understand that they don’t give a fuck. And they have the talent and, apparently, the stories to do it well.

Similar Albums:
Wavves – Wavvves
Metz – Metz
Jeff the Brotherhood – We Are The Champions