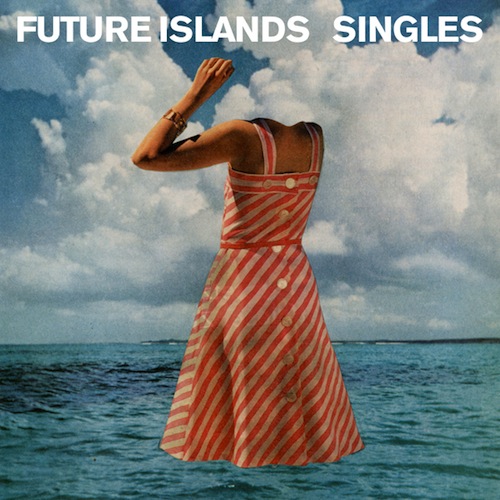 Vocalist Sam Herring says that calling Future Islands’ newest album Singles is an act of bravado. Every track is so good that each one could be a single. He’s not that far off, really, but there are key differences between this 2014 release and their others that fans won’t recognize as typical of their sound. Once billed as the constant underdog, Herring has come hard onstage this year, punches flying, or in his case, churning out inimitable dance moves — pure Herring — so good that the only appropriate response is to love him for his raw, uncensored expression. He’s the alpha dog now, prepared to take his prize at the front of a band with the power to win over David Letterman and land a plum spot at this year’s Coachella.

And yet, when he’s onstage, it’s hard to believe that Herring has ever been the underdog. His intensity is overwhelming, his act one part Jack Black ham to one part David Bowie theatrical troubadour. And Herring most definitely sells Singles as being 10 tracks that deliver exactly what the title promises. Well, right. But listening again through Future Islands’ catalog, the only thought that comes to mind is, “When did they put out a song that wasn’t that good?” From “Inch of Dust” off 2010’s In Evening Air to On the Water’s “Before the Bridge,” Herring and his crew have been building up a small army of perfect tracks for years now.

What makes this army so powerful is its earnest nature. From Herring’s blood and guts vocal delivery to William Cashion’s metronomic, slightly funky bass work, and Gerrit Welmers’ expansive, dialed-in keyboards, Future Islands form a synth-pop Voltron, or some other awe-inspiring and well-oiled mechanical unit with overwhelming power. Even their slower tracks (“A Song for Our Fathers” “Fall From Grace”) rattle your head like distant thunder. There’s something alive in them.

Recorded on the band’s own dime before they signed with power-indie label 4AD and featuring producer Chris Coady (TV On the Radio, Yeah Yeah Yeahs), there are enough tonal differences overall that Singles is a departure from Future Islands’ previous albums. Welmers still runs his keyboards with the expertise of a space shuttle pilot and Cashion slaps out heart-thrumming bass grooves. The most noticeable difference is the mix and the clarity of the overall sound. On previous albums, Herring’s vocals rode low in the mix, swinging down between the torrential waves of sound where his intensity was like that of a drowning man — every track rumbled with the anxiety of someone about to be swallowed whole. Aside from some slightly glossier production, Singles showcases Herring’s voice more than ever — it’s out in the front where it can be the centerpiece it ought to be, for all its expressiveness and energy.

In addition to the kind of hopeful subjects of the tracks on Singles — “Sun in the Morning,” “Like the Moon,” “A Dream of You and Me” — there’s a confidence on Singles that wasn’t part of the band’s tool belt prior to this release. Herring’s vocal intensity fits him better now — he doesn’t need to be buried in an avalanche of sound to reach that swelling apex of emotion. This is Future Islands at maturity, aged to perfection, and owning their sound.