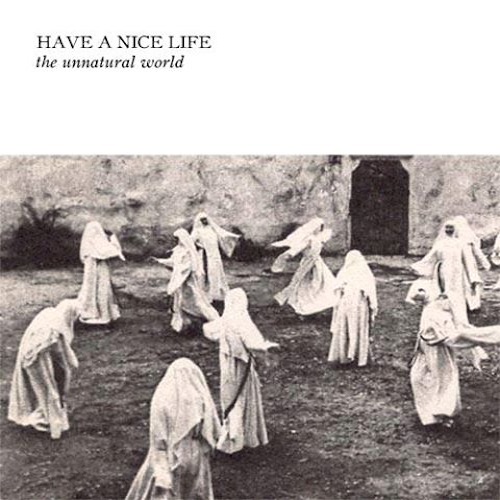 The launch of Have a Nice Life’s ascent toward becoming a revered cult band is a case study in contradictions. The project of then-unknown Massachusetts musicians and songwriters Dan Barrett and Tim Macuga, Have a Nice Life took shape when the duo began performing in coffeehouses and open mics, and subsequently released a series of demos that weren’t circulated widely outside their own ZIP code. But after five years and presumably a lot of hard work, the group recorded a dense, sprawling two-disc debut album titled Deathconsciousness, limited to 100 CD-R copies, each of which also each included a 100-page booklet. Barrett and Macuga didn’t expect the album to move like hotcakes, yet the sheer volume of powerful, gut-wrenching industrial and post-punk sounds, not to mention attention to detail in its packaging, revealed a band that really did seem to give a shit, even if they didn’t expect anyone else to.

It took some time, but eventually demand outpaced Deathconsciousness’ supply, and an increasingly growing base of fans for this obscure, elusive duo led to proper CD and vinyl pressings via Barrett’s Enemies List label. And those ultimately ended up selling out as well, and it’s easy to understand why. There’s an unpolished, raw nature about Have a Nice Life that’s a little strange, even troubling at first. But even a cursory listen to Deathconsciousness reveals the strength of their songwriting, which often parallels the haunting dirges of Joy Division, the punishing drones of Swans, or the hypnotic haze of a darker My Bloody Valentine.

The band’s long-awaited second album, The Unnatural World, is a good 40 minutes shorter than its predecessor, but no less dense, emotional, or for that matter, epic. And that’s largely because, on a song-by-song basis, Barrett and Macuga aim for bigger sounds that stretch and unfold over five to eight minutes apiece, moving in slight shifts rather than big dramatic sweeps. And when they arrive upon just the right juxtaposition of chords, the stillness and sustain aren’t just warranted, they feel absolutely vital.

And yet, The Unnatural World feels more focused and concise than its predecessor. This is all relative, of course—like Kevin Shields or Michael Gira on a DIY scale, everything that Have a Nice Life does has a sense of being absolutely massive, yet contained within a certain, highly specific sonic terrain. The opening shoegaze drone of “Guggenheim Wax Museum” is noisy and crushing in its wall-of-noise assault, but the melody itself has a graceful, mournful slowcore feel. This is beautiful music disguised by alluringly antagonistic methods, or in the case of the surprisingly infectious, Joy Division-like “Defenestration Song,” hit singles ensconced in a gauntlet of distortion.

Stylistically, The Unnatural World runs a pretty wide gamut, aggressive and immediate in one moment, and abstractly atmospheric in others. But it’s actually that commitment to densely distorted sounds that ties the record’s eight diverse tracks together. The meditative, freely floating “Music Will Unntune The Sky” is a far cry from the harsh industrial stomp of “Cropsy,” but that certain level of obscurity surrounding them—made all the more tense by Barrett’s emotional, often indecipherable vocal performances—is what makes them feel as if they’re of a piece. And yet, that obscurity can only cover so much; for as many layers as Have a Nice Life add to their compositions, all it takes is a listen to a breathtaking standout track like “Dan and Tim, Reunited By Fate” to understand just how many compelling layers there are to the band itself.

Tags
Have A Nice Life

Have A Nice Life : Sea of Worry

Have A Nice Life announce new album, Sea of Worry

Have A Nice Life announce new album, The Unnatural World