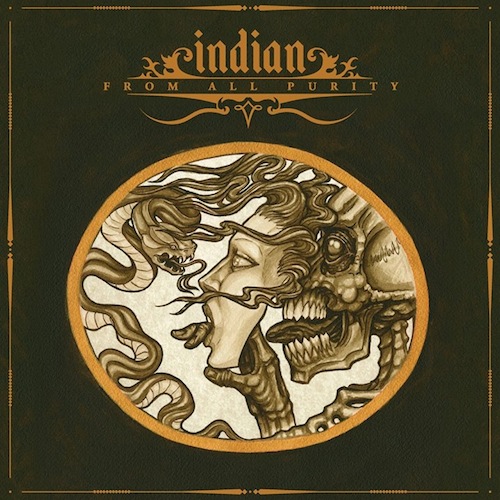 As flagrantly as the term is thrown around sometimes, “sludge” is a highly useful word when getting one’s hands dirty deep into metal’s dank, swampy muck. It’s an ugly word — sludge — evocative of the nastiest of nasties, the things you wouldn’t care to see flowing through pipes beneath your city, or breaking down into a corrosive filth in a fetid swamp. As you would imagine, not every band that’s been called “sludge” cares much for the term, and as a catch-all, it’s not terribly helpful in letting you know what a band sounds like. But when you get right down to the influentials and progenitors of the style — Eyehategod, Melvins, Neurosis and Acid Bath — we’re talking about something pretty ugly and raw, here.

And if it’s ugly and raw you’re after, there’s no band that treats these qualities with such awe-inspiring reverence as Chicago’s Indian. A band that has shared members with Wolves In the Throne Room and Nachtmystium, Indian is prone to go blackened when the filthy menace of evil comes coursing through their vile sonic muck. And given how evil they sound most of the time, that’s fairly common, particularly in the harrowing shrieks of vocalist Dylan O’Toole. But they mostly evade the monsoon torrents of blast beats in favor of a slowed-down, more brutally bruising approach.

That approach yields some triumphantly nasty sounds on From All Purity, their fifth album in a series of albums that maintain both a guttural intensity and slight variations on a similarly cool/macabre cover design aesthetic. Its six songs mostly hover around the six-minute mark, working out their burly, screeching catharsis slowly and viciously, making every thunderous riff crash down with maximum impact. And save for the four minutes of piercing static in “Clarify,” they pretty much all accomplish what they set out to magnificently, whether in the dense noise-rock wall of “Rape,” or the booming pummel of “Rhetoric of No.”

Indian is also highly adept at more melody-driven epics, the sheer power of which best translate their capabilities. You can be loud and menacing and sound absolutely terrifying, sure — but can you do the same thing with your most immediate, accessible songs? Not that “Directional” and “Disambiguation” are smash hits by any means. But their melodies sink in slowly through the haze of each repetition of their riffs, rather than with relentless bludgeoning. Though it’s worth noting, this shit’s definitely still as heavy as it is when the melodies are less prominent. It’s just that on From All Purity’s best moments, Indian’s brand of ugly approaches real beauty, which is a real accomplishment in itself.