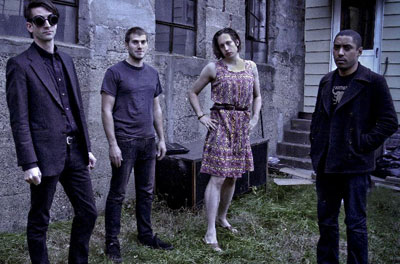 There’s something deeply, deeply unsettling about Pop. 1280. The New York band specializes in brutal, abrasive sounds, inspired by a bruised and bloodied mixture of The Jesus Lizard, noir, The Birthday Party, coldwave, the impending apocalypse, desolation, a hopeless future, and the innate desire to make a glorious ruckus. On their latest album The Horror, just released on Sacred Bones, Chris Bug, Ivan Lip, Zach Ziemann and Pascal Ludet explore a particularly dissonant form of post-punk through barren landscapes and darkened alleyways. It’s a stunning experience for those willing to submit to its intensity.

Guitarist Ivan Lip took the time to talk to us about the album’s recording, the themes on the record and how inside jokes make their way onto the album.

Treble: Was there a specific idea conceived for the album before you recorded it?

Ivan Lip: No, not really. It wasn’t really planned out. I think it was a continuation of a lot of the ideas [from The Grid]. We were in a rotten state of mind when we wrote it. And with a changing lineup, it kind of put us in a depressed state of mind. This one is kind of down, and dark.

Treble: What pushed you toward these darker themes?

IL: Hard to say. I think that at least six or seven months leading up to the record, we switched lineups. It’s not the easiest thing in the world. It was like a death by a thousand cuts lineup change. We slowly stopped communicating. And on our last tour before that, at most van stops, people would just go off into their different camps. It wasn’t very fun. It’s nobody’s fault, but it just happened.

And when we first started playing together, we ended up as part of this scene, and there was a sense of community… But when we started writing this record, we started to feel like we were more on our own. There was just a feeling of being more on our own. And I think that there was just a lot of personal stuff in people’s lives going on, nothing really interesting enough to talk about, but just normal, day-to-day stuff getting us down.

Treble: How much of the album was written prior to going into the studio?

IL: I think, probably… probably 70 percent was written. Two songs were… two or three were written in the studio. We had some very basic ideas and thought, we’ll just do this with some improv in the studio. With The Grid, all of the songs had been played live at least 20 times. But with this record, even some of the songs that were written ahead of time had only been played live once.

Treble: Was there a more concerted effort to keep the sessions loose?

IL: Yeah, well, we tried on this one. It was more of a punk recording, but we wanted to keep it a little loose. Definitely, a few songs, I didn’t know what I was going to play. So I would do a scratch track, and later on I would try to clean it up. So there’s kind of a contradiction or conflict to it. When I listen to the recordings, I can hear flaws, but if given more time, I’m not sure what I’d do differently.

Treble: Is it important to stay conscious of being able to recreate something live?

IL: I think I try to be conscious of it. Recreating it live is especially important to me. I think we can play eight of the 10 songs on the album live, no problem. But you almost work through some stuff live. Sometimes you get fucked up and play something differently live. But you also kind of work out the kinks. I try to make sure we can play it live, at least just the basic parts that every instrument plays.

Treble: I get a definite sci-fi vibe from the album; how much does science fiction inspire your music?

IL: I’ve never really thought about it. For Chris, especially, I’m sure he’d say sci-fi influences him. But I don’t know where the dystopian future thing comes from. It just sorta happened. Like, the song `West World,’ doesn’t really have anything to do with the movie. The word just made sense, because there’s a westward expansion thing going on.

Treble: What’s the origin of the title, The Horror?

IL: It’s sort of an inside joke between me and Chris – Chris and I wrote most of the stuff, all of the lyrics and most of the music. It’d be Sunday morning, and he and I would go get breakfast, and I would say, `how are you doing?’ And he’d say, `The Horror!’ It’s what Kurtz says in `Heart of Darkness’ and `Apocalypse Now.’ So, it’s just something we say. Like, if we’re hungover – `The Horror!’ (laughs) But when we started writing songs, we started to notice that there were a lot of depressing feelings in them, so it just fit.