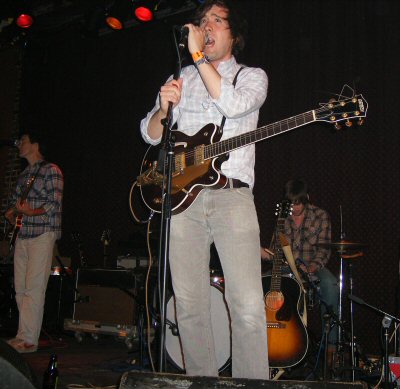 As the fall touring schedules began emerging, I made up my mind that I was going to stop checking them and save myself the regret of not being able to participate. Countless times in the past I’d made the conscious choice of being a shut-in regardless of who was coming to Florida. That is if we down yonder are lucky enough to even get dates for artists of the indie persuasion that have any kind of stripes. It’s commonplace for tours to go as far south as Atlanta (unless your name is Sufjan it’s just too far too drive for a singular show) before either turning back north, heading west, or truncating altogether. If the Sunshine State is included on the itinerary, seldom do the shows come further south than Orlando.

Aside from Yo La Tengo in February (which I sat out), I can’t recall the last time a can’t-miss artist came to Tampa. On top of all the reluctance was the fact that I’m in the middle of one of those lengthy personal hiatuses in which for all intents and purposes one manages to fall of the face of the Earth. This summer I’d initially mulled over the prospect of seeing Bishop Allen, before succumbing to said hiatuses, the two hour drive to Orlando, lack of funds, and otherwise just plain “not feeling it”. I was also under the impression that Bishop Allen was now popular enough to be the headliner but to my initial dismay that was inaccurate. So with everything stacked on the con-side it was a dead issue in my eyes and I wouldn’t be attending.

Of course since you’re reading this it can be inferred that I indeed ended up going after all (not without a shit-ton of coaxing). Since I hadn’t planned on going I found myself with the unforeseen luxury of having relaxed my expectations and for one of the first times in recent memory I was able to overcome my headcase tendencies and just go with the flow. As we waited for Bishop Allen to take the stage both John Vanderslice and Alan Peoples…err Justin Rice roamed amongst the crowd as for a second I mulled over asking Rice if he had come up with a name for the “cool inclusive” club.

All shameless “Mutual Appreciation” references aside, Bishop Allen opened with “The Same Fire” a song that was far better live that the studio version of the June EP. “Rain” was memorable; more because its beauty can’t be tarnished even if the first half of Bishop Allen’s set seemed to lack passion. It could have been on account of it being the tour’s opening night or that Rice appeared to be under the weather as there’s been a bug going around for a couple of weeks in these parts. One concertgoer was even inclined to don a dust mask, which me being an unsympathetic asshole, found to be unfashionable as hell.

It wasn’t until “Queen of the Rummage Sale” that Bishop Allen hit their stride on the talent of Rice and his corroborator Christian Rudder. “Queen” led into a rendition of “Middle Management” which was as bouncy as one would expect, followed by the customary, representative, and possibly most household Bishop Allen track, “Things are What You Make of Them”. The band used a lovely medley of two ballads to close out their set on a somber yet lasting note, meshing “Flight 180” and “Eve of Destruction” (sans Charm School namedropping pseudo-rap intro).

There couldn’t have been more than 200 people at The Social and the crowd seemed split amongst both bands, though the most energetic trio of fans would belong to John Vanderslice. What I knew about John Vanderslice was that as a veteran of the indie scene he has put out a handful of records, the most recent of which, Emerald City, I was fairly familiar with and vaguely knew of his past staple songs (“Exodus Damage,” “Trance Manual”).

Vanderslice played all but two songs off of Emerald City, opening with “Kookaburra,” “Time to Go,” and “Tablespoon of Codeine.” JV’s band of adept players included Dave Douglas on drums, Ian Bjornstad on keyboard, and the much heralded Daniel Hart wielding the violin. After going into the archives for one of my favorite tracks, “Exodus Damage,” Vanderslice played “Angela”—about a runaway bunny and “Trance Manual.” At mid-show each of the three supporting members would depart the stage in sequence until it was just Vanderslice and Hart left for “Dear Sarah Shu,” when Hart told the crowd of his fantasy of having a “double-necked violin with extra strings and a goblin head at the top that sprays slime, like from Ghostbusters, on the crowd as his playing intensifies.” With just himself on stage of “Numbered Lithograph,” JV put out a fantastic rendition in which he relied on rapping his fist on the acoustic guitar for percussion. Playing newer favorites such as “The Parade” and “White Dove” as well as older ones “Me and My 424” and “Pale Horse,” Vanderslice played with a sincerity which is seldom seen, offering himself to fans during the strong set, lingering afterwards to talk to just about everyone who enjoyed his company. The night’s crowning moment was the closing song “Keep the Dream Alive” in which JV turned it into a takeaway show (a la La Blogothèque) as we poured onto the downtown Orlando street. Baffling bystanders, transients, and street rappers, we joined Vanderslice in performing a stripped down, unitary version of “Time Travel Is Lonely” on a windy September night that would signify the start of fall in this ungodly humid part of the country. Myself, I’ve been left with a concert memory that may even surpass seeing “Majesty Snowbird” performed live.

Listen: Bishop Allen – “Why I Had to Go”