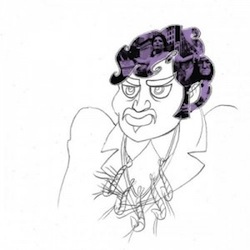 You’re unlikely to find a garage rock record released in the last 10 years that’s as good as King Khan and the Shrines’ What Is?!  In fact, to call it a garage rock record sells it a bit short. There are fuzzy guitars, certainly, and a charismatic, evangelical howler of a singer, who has openly worshiped at the altars of Sun Ra and George Clinton. That’s pretty hard to beat as it is, but taking it a step further, King Khan and the Shrines don’t so much play garage rock in the “ramshackle” or “punk” sense of the word — they do classic, fuzzed out R&B with a full horn section and occasionally a lush backing of strings. Simply put, if you can fit their soulful, psychedelic rock orchestra inside a garage, then it’s at least a Romney-sized car-hole.

To be fair, there have been plenty of great garage rock albums released since What Is?!, and most of them belong to Ty Segall. And Khan, himself, has issued a handful of records with BBQ, aka Mark Sultan. But while it took six years for the Canadian troubadour and his band of merrymakers to recapture the brightly burning spark that made their last album such a wild celebration, it’s a wonder it even happened at all. In 2010, following the deaths of three friends — including fellow musician Jay Reatard — King Khan reached a breaking point. In an interview with Spin, he explained that he “would be laughing with someone and just start crying.” He found spiritual enlightenment at a Buddhist temple, and later went through psychiatric treatment. He even briefly retired from music, but it didn’t take. Thank God.

The past six years of King Khan’s life — the ups and downs, the joy and anguish — all pour into Idle No More, the Shrines’ first for Merge, and a set of tunes with just as much soul and brilliance as its predecessor. There’s a big rush of riffs and strings on the opening track, “Born To Die,” a song with a title that carries a lot more weight when you understand the journey that led to the album. It’s a fun, hip-swinger of a song, a riff-based, rhythmic party jam, but it too has a darkness lurking within, Khan offering up dark wisdom like, “Trust your bloody eyes/ Don’t leave ‘em dead, because you’re next in line.” There’s a similar push and pull between reflecting on some hard-earned lessons and getting asses waggling on “Bite My Tongue,” in which Khan asks, “When the shit hits the fan/ Tell me who you think is the man.”

By track six, the aptly titled ballad, “Darkness,” the feeling-good-to-stop-feeling-bad vibes fade away and all that’s left is feeling bad. Not that it doesn’t sound great — the mix of strings and brass against a bluesy rhythm has the feel of a David Axelrod-produced Lou Rawls cut. When the pace picks up again, on Jay Reatard-tribute “So Wild,” there’s an even more overt sadness beneath the hooks and riffs, which sound a lot like Foo Fighters’ “Times Like These,” unexpectedly. It’s still plenty rocking, even though what follows doesn’t quite match the dynamite detonation of the first four songs. That’s okay — Idle No More doesn’t have to be another What Is?! And it isn’t. It has its own character, its own bruises and scars. Idle No More is seasoned with tears and carries an ache that lingers, but in getting all this out in this open, King Khan once again ends up with an album that feels good to listen to.

King Khan and the Shrines sign to Merge, working on new album

King Khan & The Shrines : The Supreme Genius of King Khan and the Shrines