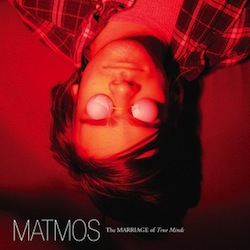 The first sound to be heard on Matmos’ 2001 medical-instrument-based album A Chance to Cut is a Chance to Cure is that of chopped up synthesizer and liposuction. On 2003’s historically minded The Civil War, it’s a cacophony of fiddle and flute. With 2006’s gay icon tribute, The Rose Has Teeth in the Mouth of a Beast, the electronic duo ushered in a shuffle of beats and a voice stating, “A goose has no teeth.” And on 2008’s Supreme Balloon, the opening sounds are those of primitive analog synthesizers, awakening from a modulated filter fog. Yet on “You,” the opening track to Matmos’ first album for Thrill Jockey, The Marriage of True Minds, the duo of Drew Daniel and MC Schmidt start the show with the simple, stripped down sounds of piano. From here, there’s a clear indication that things are different this time around, though not in any expected way.

For something to be different for the ever-evolving, ever-inventive Matmos, however, is for things to remain as they always were, in a manner of speaking. The duo has never made the same album twice, and each new recording presents the opportunity for a tabula rasa — Matmos records begin from scratch, from an abstract idea, and build outward from that central theme. In 2001 it was the idea of recording medical instruments as musical instruments. In 2003 it was basing sonic compositions on various civil wars throughout global history, and using historical musical motifs to do so. And so on — no group takes conceptual songwriting to the extremes that Matmos does, and as such unpredictability and inspirational renewal are a constant in their world.

With The Marriage of True Minds, the clue to the conceit is in the title — Daniel and Schmidt conducted experiments in which subjects would attempt to read, telepathically, their intentions, which ended up as the basis for the songs on the album. You might not get that from hearing a sparse bit of jazz piano at the opening of the album, but it doesn’t take long for the concept to become all the more central to the group’s compositions. Back to “You” — it’s a pretty chill song, pretty and elegant, far more streamlined than the group’s typically absurdist IDM party, but at 1:43, the thesis statement is more or less stated in the simplest terms possible: “Telepathy/ We want to know.”

Human voice plays more of a central role on The Marriage of True Minds than it typically does on Matmos albums, and in many cases those voices are notable ones, musically speaking. The throat-singing that opens the fuzzy disco banger “Tunnel” belongs to Dan Deacon, which is fitting — there’s a psychedelic acid-trip to the heady dancefloor stomp, which has always been a key aspect of Deacon’s music, despite him being drug free. The crooning in darkly gothic chamber-pop groove “Very Large Green Triangles” is that of Ed Schrader, and the last two psychic-based tracks on the album, “In Search of a Lost Faculty” and “Aetheric Vehicle,” feature the contributions of former Dirty Projector Angel Deradoorian and Wye Oak’s Jenn Wasner, respectively. And somehow, the theme that keeps coming up via the album’s spoken word samples is that of triangles; whether or not that was the image projected by Schmidt or Daniel toward their subjects, that’s pretty spooky.

As experimental as the concept is behind True Minds, as well as the eerie nature of it, there’s still something very immediate and fun about the album, which in the end makes it a perfect fit in Matmos’ discography. It’s danceable at times, jazzy in others, and sometimes outright pretty. But that they end it with a cover of the Buzzcocks’ “ESP” (get it?), even if it is a little more terrifying than the original, shows that Matmos, even when committed to a thematic element, aren’t above closing out with an encore of punk rock and kitsch. The Marriage of True Minds deals heavily in odd coincidences and strange synergy, but at the heart of it all is a pair of musiciansn who are most interested in making music that’s enjoyable. On paper it might look like a doctoral thesis, but on headphones it still bumps.

The Books – The Way Out