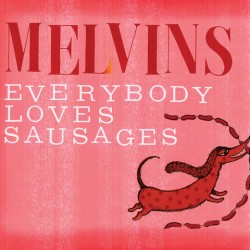 For most bands, it’s a fantastic achievement to be able to play music together for 10 years. The constant grind of writing, recording, touring, and then doing it all over again, can wear down even the heartiest of road warriors. Not to mention the challenge of keeping your audience engaged time and time again. Because of this, most bands simply fall off the radar after a while. The Melvins, however, are not most bands. Comprising equal parts punk, metal and sludge, with a pinch of experimental sounds, the Melvins have been delivering memorable records for the last 30 years. In celebration of their three decades spent in music, the Melvins (and a bunch of their friends) serve up a new album of covers, appropriately titled Everybody Loves Sausages.

Like the majority of the Melvins catalog, Everybody Loves Sausages is a fairly multi-faceted affair. The album opens with “Warhead,” which is a take on the classic Venom track of the same name. Along for the ride on “Warhead” is Scott Kelly of Neurosis fame, whose presence on lead vocals absolutely pummels the listener into submission. The onslaught of distortion doesn’t last for long, however, as the band launches in to the Queen classic “You’re My Best Friend.” While it may seem like a strange decision to have the poppy, upbeat vibe of “Best Friend” follow a Venom cover, it actually does wonders for the Melvins, showcasing the group’s penchant for musicianship of all varieties. The booze-drenched sound of Leadbelly’s “Black Betty” and the rollicking punk of The Jam’s “Art School” see the band slam on the gas pedal and kick up the speed and volume to new heights.

While a good chunk of the songs represented on Everybody Loves Sausages have — at the very least — shades of the original compositions, others seem to completely rewrite the song altogether. The sprawling cover of the David Bowie classic “Station to Station” sees the Melvins strip away the funky dance beat of the original in favor of heavy distortion and a gritty vocal performance from JG Thirlwell, aka Foetus. Likewise, the slinking, jazzy upright bassline and lo-fi drumbeats in “Female Trouble” (originally by Divine) are an unexpected but pleasant surprise. In this instance, the Melvins version of the song may actually be better than the original track, which is a feat in and of its own. The rendition of the Roxy Music classic “In Every Dream Home A Heartache” sounds fairly straightforward and similar to its predecessor… that is, until the band explodes into a cacophony of distortion thanks to Buzz Osbourne’s squealing guitar, Dale Crover’s brutal punishment of his drums and guest vocalist Jello Biafra’s anguished howls, making it a standout highlight on an already fantastic cover album. The collection closes with a rendition of “Heathen Earth,” originally by Throbbing Gristle. Whereas many modern musicians might cower at the thought of tackling a track from the industrial/noise legends, King Buzzo does so with such grace and efficiency, that you almost forget that it’s a cover song in the first place.

Everybody Loves Sausages offers a little bit of something for everyone. Although it’s an album of songs made (somewhat) famous by other performers, it’s the diversity and precision that the Melvins employ that make the record sound fresh. After 30 years of stunning listeners and audiences with their own compositions of heavy, psychedelic and expansive rock, Everybody Loves Sausages proves that the band is just as vital today, even when the songs they play aren’t their own.