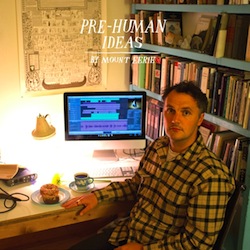 So much has been made of the natural, woodsy and dark quality of Phil Elverum’s music that at this point, he’s almost expected to sprout leaves and a thick coat of peat moss, himself. And though nature does play a major part in his imagery, it’s more the metaphorical forests that have played the most prominent role in albums like The Microphones’ The Glow Part 2, Mount Eerie’s Clear Moon, or even his black metal album, Wind’s Poem. Listening to these albums can feel like being lost in a dark and unfamiliar place — a beautiful one, but still surrounded by a vague, chilling sense of danger, whether real or imagined.

It’s hard not to see Elverum’s latest collection, Pre-Human Ideas, as a knee-jerk reaction to that perception. Comprising new versions of previously released songs, it’s not an album of new material per se, but a new look at old material, through a digital filter. Everything on the album was recorded straight to computer, using synths and MIDI, and lots of Auto-Tune. Even the album art depicts an Elverum we’re not used to: He’s merely sitting, mild-mannered, in front of his computer with a cup of coffee and a plate of donuts.

In the abstract, Mount Eerie songs don’t really seem like they should be subjected to such digital chicanery, but Elverum has been recording music for long enough that he knows what he’s doing. And where Pre-Human Ideas could have very easily gone from mere novelty or complete disaster, the finished product is characteristically charming, weird and often quite beautiful. At times the use of Auto-Tune can be a little off-putting, particularly when Elverum alters his pitch. The ultra-low vocals on “No Inside, No Out” carry a trace of the strange Minecraft-created “Potato Knishes” song. But more frequently, the digitally altered vocals create an extra layer of ghostly detachment in songs that already carry their share of eerie atmosphere. “I Say ‘No’” feels a lot more like Wayne Coyne’s robo-voice experiments than Kanye West’s, though in the final 30 seconds of the track, it erupts in a giant thrum of Earth-style distortion. And “The Place I Live” is curiously, confusingly gorgeous.

Pre-Human Ideas is definitely weird, though not in a way that Mount Eerie typically is. Its mixture of ethereal synths, intangible darkness, surrealism and disorientation is familiar, though — if you’ll forgive an overused term of late, it’s Lynchian. What he creates here is closest to Angelo Badalmenti’s soundtrack to Twin Peaks, and though that might seem a little too on the nose, he does live just a few hundred miles from that fictional Washington town. For Elverum this may have been just a fun experiment, or an exercise to prove a point, and it’s safe to say he accomplished both — that is, assuming the point was to show how strongly his music holds up in an entirely different context.