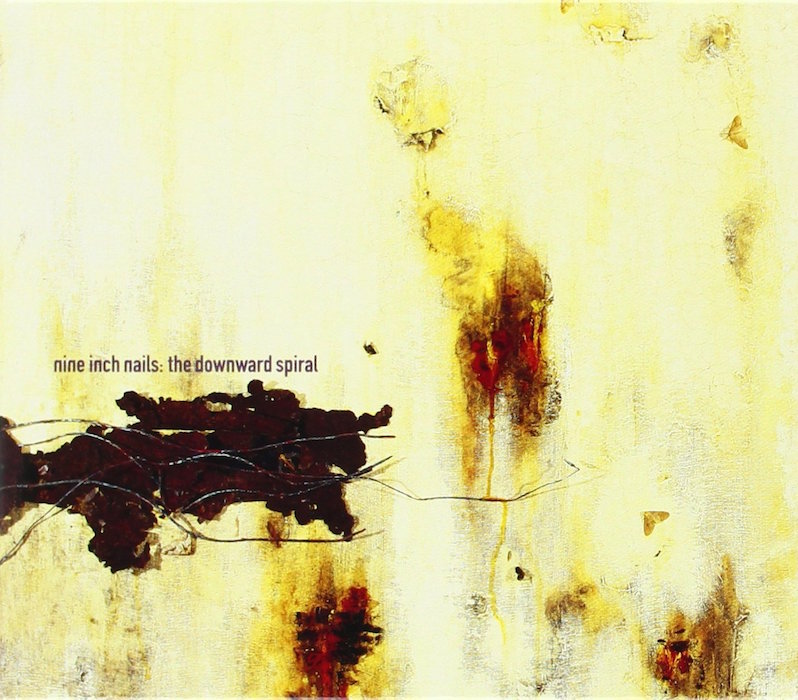 In the mid-’90s, nobody did provocation like Trent Reznor did. Nine Inch Nails’ performances were orgies of fishnet-clad, mudcaked violence, not far removed from the villainous rock ‘n’ roll vaudeville of Alice Cooper—one of Reznor’s own influences. Only at the end of Nine Inch Nails shows, the band’s instruments suffered fatalities instead of the star. In 1992, Reznor collaborated with Throbbing Gristle’s Peter Christopherson to make a longform music video meant to give the appearance of a snuff film, which was never officially released but its outtakes—the human waste-disposal maze of “Pinion,” the performance art torture of “Happiness in Slavery”—were still the stuff of nightmares. And by 1994, he turned the direct, vulgar and highly radio-unfriendly phrase “I want to fuck you like an animal” into one of the year’s biggest choruses. That, of course, was on an album recorded in the house where the Manson Family murdered actress Sharon Tate (for which Reznor has since expressed regrets). There wasn’t much of a limit to the lengths Nine Inch Nails would go to obliterate polite, conservative American social conventions. Not much really horrified Reznor himself, other than hearing a soul-baring ballad he wrote succumb to the crass, banal fate of becoming background music in a strip club.

“To my horror, to my absolute horror, I realized the DJ was playing ‘Hurt’ …a song based on the most personal sentiments, the deepest emotions I have ever had: ‘I hurt myself today/To see if I still feel.’” Reznor said in Jonathan Gold’s 1994 Rolling Stone profile of the band. “But there we were, and there it was, and girls were taking their clothes off to it.”

Nine Inch Nails in 1994 were, from the outside, a dangerous band. Anyone who’s ever ridden a motorcycle in a leather jacket can tell you just how appealing that can be, but Nine Inch Nails pushed limits in a way that no other band of their time did. And though the band’s sophomore effort The Downward Spiral was a massive success, it made people nervous. When I was 11 my parents expressed their reservations about me hearing the band’s Broken EP; suffice it to say I waited for a cooling-off period (and taping tracks off my brother’s copy) before finally picking up The Downward Spiral. But my first tastes of it only reinforced how exciting it was at the time, first the leadoff single “March of the Pigs,” a thoroughly weird three-minute feast of destruction in 7/8 time that culminates in a major key piano chorus of all things, and second “Reptile,” as heard on a KROQ pre-release preview of the album, which sounded like a symphony of evil robots. But, like, sexy evil robots?

The level of success that Nine Inch Nails achieved with The Downward Spiral, however, is far greater than likely anybody thought possible from an artist inspired by noise-crafting performance artists such as Throbbing Gristle and Einsturzende Neubauten. The album sold more than three million copies and counting—nobody sells that many records anymore, and definitely not bands who weaponized samplers like Nine Inch Nails did. Certainly the ’90s were a strange time for music, and so-called “alternative rock” was highly marketable, but in the wake of Nirvana everybody was getting a major label contract—so many that, in hindsight, it seems fairly obvious only a handful of them would actually prove to be commercially successful. Nine Inch Nails was different, though. Trent Reznor tapped into the same kind of disaffection and detachment that Nirvana did, but with the tables turned slightly, embracing a more sexualized kind of aggression and social commentary examining structures of power and control. And, of course, they did so while making the kinds of noises that most bands hand even figured out how to make, let alone innovate on their own.

Then again, when you strip it all down, The Downward Spiral is still a pop album. Nine Inch Nails recently toured with The Jesus and Mary Chain, whose 1985 debut Psychocandy was a sort of stripped-down template for the kind of fucked-up pop delivery system Reznor created here. Only instead of packaging Beach Boys melodies inside feedback-laden rock songs, he made dance music so distorted it was difficult to tell what was going on (“Ruiner”), or EBM wallpapered with screams of agony (“Becoming”), or what sounds like heavy, crushing machinery providing an almost-danceable rhythm (“Mr. Self Destruct”). The Downward Spiral, ostensibly a concept album about one person’s own descent into personal hell—mirrored in a way by the struggles with addiction that Reznor went through after the album was released—is the angriest party music ever made.

“Although I liked the sound of it, and I liked the attitude and anger, there was something I missed,” Reznor said of other industrial bands on NPR’s Fresh Air. “I missed the fact that you couldn’t sing along.”

It is, certainly, angry. Reznor lashes out at religion in “Heresy” (“God is dead and no one cares/If there is a hell, I’ll see you there“). He works through some intraband frustrations in “Piggy.” And on one of the album’s few missteps, “Big Man With a Gun,” lampoons a macho American attitude. But amid the rancor and rage are great pop melodies, none of which rival its breakout single, “Closer.” It’s not just pop, it’s disco—sweaty, heaving, libidinous disco that once and for all made alternative rock sexy. Making “I want to fuck you like an animal” the hook was, perhaps, a little on the nose, but there’s a funk to the song that’s undeniable, made all the more compelling with the S&M-via-Luis Buñuel music video, depicting a rotating leather-clad Reznor, a weird wind-tunnel effect, nude models in leather masks, cow skulls, a monkey…lots of weird shit you wouldn’t ordinarily see on MTV. But the groove is undeniable. It’s the one song that sounds at home in both a goth club or a giant stadium.

The Downward Spiral isn’t uniformly intense or confrontational. Nor is all of it even arguably pop music. Toward the back half of the album it begins to take on more of an avant garde tone, particularly in the instrumental “A Warm Place.” It’s a brief break from the chaos, sadomasochism and loathing. It’s the prettiest track of the bunch by far, if the one that takes the most listens to fully soak in, more Eno than Einsturzende Neubauten. There’s a similarly meditative sensibility to the album’s title track, which pairs a whirring drone against the coda riff of “Closer” played on acoustic guitar. There’s a brief moment of hope—just before the eruption of the muffled sounds of metal band playing in a neighboring building, beneath Reznor’s own narration of a suicide. There are noisier, harsher and more sonically violent tracks on the album, but none quite so intimately disturbing.

And then there’s “Hurt.” A song so delicate and vulnerable yet atypically pretty, “Hurt” lived a life outside of The Downward Spiral. In 1994, the album’s closer found success as a radio hit, its balance of melodic triumph and personal anguish making a musical foil to the libidinous goth-disco vibes of “Closer.” By Reznor’s own accord, it was a devastating song to create, a glimpse beyond the spectacle and sensationalism into his own a pain that only he felt. Eight years later, however, Johnny Cash channeled something very different in the song, turning it into an American gothic hymn in his final year of life. Reznor was initially skeptical about the novelty of having Cash cover his song. Once he heard it and saw the video, however, his cynicism disappeared: “That song isn’t mine anymore.”

Reznor probably didn’t mean it belonged to strip club DJs, and he definitely didn’t mean it back in 1994. But a funny thing happens when you sell nearly four million copies of an album, find your face on the cover of Rolling Stone, and the fucked-up imagery of your weirdo art-film music videos—no matter how blurred or how many scenes are “missing”—plays on MTV at regular intervals. Your music becomes part of something bigger. It belongs to everyone.

Trent Reznor also isn’t the same person now that he was when he made The Downward Spiral, by his own account, and no longer resembles the figure at the center of those songs. “I like myself again. I’m able to have mature relationships,” he told Terry Gross in 2011. “And I think my art has gotten much better.”

That final point is a matter of perspective. Certainly an album as monolithic as The Downward Spiral casts its shadow over everything he’s done since, though it’s hard to argue that recent records like the strange, saxophone-heavy Bad Witch aren’t among the most compelling, risk-taking Nine Inch Nails releases in years, let alone among his best. Still, The Downward Spiral remains Nine Inch Nails’ definitive primal scream, and the moment in which the twisted, experimental realm of industrial cannonballed into mainstream consciousness. Now, Nine Inch Nails’ mark can be heard throughout the expanse of contemporary heavy, alternative and underground music. You hear them in Chelsea Wolfe, and you hear them in HEALTH. Hell, on some level, you can even hear them in St. Vincent and Mitski.

On The Downward Spiral’s highlight “I Do Not Want This,” Reznor screamed, “I want to do something that matters.” After 25 years, during a time when music feels its most insular, the industry is even more rudderless and precarious than its ever been and existential fear of global warming and financial collapse weigh heavier than any terror that thrills, The Downward Spiral still does.