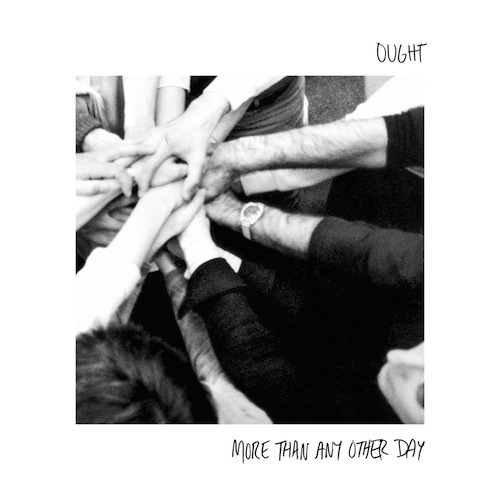 At the beginning of “Pleasant Heart,” the first track on Ought’s More Than Any Other Day, vocalist Tim Beeler sounds a bit on edge. “Something crawled into your pleasant heart and cried out for the head,” he sings, with a jittery, uneasy cadence that hits somewhere in the middle of the spectrum between David Byrne’s nervy sing-speak and the ominous visions of Lungfish’s Daniel Higgs. Not every verse or meter is punctuated in a recognizable pattern, or delivered with linear simplicity, but every word feels quietly intense, crucial. By the end of the song’s six minutes, Beeler transforms from a man nearing the end of his rope to one watching that final thread fray, crying out, “Saying how and what we are/ When you’re living in the shell!” What does it mean, exactly? That much isn’t so clear — a press release cites the Quebec student general strike of 2012 as a catalyst for the group’s music — but if the visceral feeling in Beeler’s voice is any gauge, it’s of the utmost importance.

Beeler — who previously performed as a folk singer and poet — is just one cryptic and articulate piece of wholly captivating puzzle on the band’s Constellation debut, More Than Any Other Day. Montreal’s Ought — which comprises three U.S. natives and one Australian — agitate without resorting to outright assault. They play rock music, though they never do any stereotypical rocking out. And their sound is steeped in classic post-punk, but eschews any bad taste of post-punk revival in the last decade or two. In short, Ought is a band that may very well sound familiar — though you might have trouble determining why that is.

What the group pulls from post-punk can mostly be heard in the atypical abrasion with which they infuse their labyrinthine songs — most of which push well past five minutes apiece. There’s a sense of danger and building momentum in the jagged shards that ring out from Beeler’s guitar on “Pleasant Heart” — scratching, screeching and layering over itself into a gloriously chaotic orgy of melodic din. It’s a hell of an introduction, but where that song ends with Beeler at his most apocalyptic and intense, on the following song, “Today, More Than Any Other Day,” there’s a lighter and more optimistic tone to the proceedings. The band lets off the accelerator just a bit before allowing in a rush of Feelies-style jangle beneath a laundry list of mundane joys: “Today, more than any other day, I am excited to grocery shopping/ And today, more than any other day, I am prepared to make the decision between two percent and whole milk.”

The moments in which Ought scales back a little open their sound up to unexpected revelations, and Beeler’s lyrics to a greater degree of reflection and vulnerability. “Habit” — one of the strongest tracks of the bunch — has a graceful and melodic tone, juxtaposing hypnotically hushed chords against Tim Keen’s abrasive violin as Beeler compacts his lyrical intensity into a more intimate directness: “Do you feel it, like I feel it/ ‘cause I need to know I’m not alone in it.” And slinky, Spoon-like groove of “Around Again” finds Beeler chanting “go slow, go slow” like a mantra, and capping more than five minutes of generational anxiety by asking, “Have we lost the rhythm?/ Can we wake up and start again?” He’s not any closer to absolute clarity (or “Clarity!”, the title of the whirlwind seventh track on the album), but there’s a lot less echoing inside these spaces, giving at least an indication of an exit strategy out of the nervousness that’s been building up in five-minute increments.

When Ought arrives at “Gemini,” the final track on More Than Any Other Day, they achieve a kind of symmetry — ending the album much the same way it began. Aside from a brief touch of gospel organ, its back to a percussive guitar scratch, a persistent rhythm, and Beeler in self-contradictory snarl mode: “I retain the right to be disgusted by life/ I retain the right to be in love with everything in sight.” And as the group hits the brakes after a series of repeated screams, what Ought are all about comes more clearly into focus. More Than Any Other Day is as much about emotional release as much as it is taking the long way around pop songwriting. You can’t spell “cathartic” without “art.”